I’m on a kick to try new waters and fish in new situations. So, when Alex Bagdonas arranged for a float down a new river, I was ecstatic. Unfortunately for us, the coronavirus situation was becoming more clear and dire. We made do. Rather than carpool, we drove in separate cars. We wanted to make the outing.

After all, this was a float trip with The Waterwolf.

Greg Brown, known on Instagram as @waterwolf_802 (here), is a passionate angler and fly tier. He chases trout, pike, bass, carp, and muskies with the fly and harbors a manly beard with a length that varies according to the season and his particular mood.

Full of energy and quips, he is a person who knows his craft. He also is a person who has gone through enough challenges to test any soul, which makes his bright outlook on life all the more impressive and unusual. He is one tough dude.

Alex and I left our hometown bright and early on Sunday and jetted out, barely escaping a speeding ticket en route. We met up with Greg, fueled up, and headed over to a put-in. (Per my personal policy of not sharing others’ spots and flies, I cannot tell you the river we fished, unfortunately.)

After the usual logistics of getting the raft ready, into the water, and re-locating the trailer, we shoved off and were floating, care-free and eager to fish. There was ample room in the three-man Stealth Craft, christened “Bellatrix,” to maintain the required six feet of social distancing.

Alex and Greg know each other well. The jokes and insults and jokes rotated continuously and effortlessly. Greg recently lost a bet to Alex, and trued up to the pool, which was “a shot and a beer.” As it was morning, Greg thoughtfully provided a Pabst Blue Ribbon Hard Coffee (yes, it is now a thing) and a nip of Fireball.

The landscape was late-winter stark. Trees were stripped, the grass was dead, and the occasional gust reminded us that Old Man Winter was still hanging around. But, oh the beauty of moving water, both its sight and sounds. We soon anchored up at a gentle run.

I unhooked my fly from the hook keep and prepared to cast the ol’ bobber. The six-weight Contact (review here), while designed to tightline for steelhead, is my go-to indicator rod. Its 10’8″ length makes for easy line control. It’s a bit soft at the tip, which is what Euro rods are made for, but slowing down a cast is all I needed to do to get some good distance.

On the second cast, the bobber dipped, I set the hook, and saw a flash of gold and brown. I’m good with rainbows, but the brown trout are what I’m after, ideally wild ones. This fish was spunky, but pulling it up into the current seam tired it without too much fuss, though it took a few attempts before Mr. Brown called it quits.

Greg had a measurer taped to his boat. “A solid 17 inches,” he said, before we took a few quick pics and let the brown go. It was a nice buck with solid shoulders. 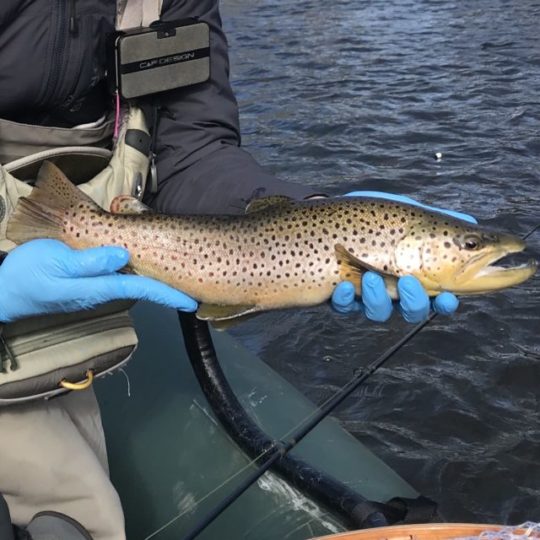 With water cold, we threw junk flies 90% of the time. The action was very slow, but it was a soothing float, with plenty of laughs and beautiful scenery. And, there were no other anglers, either wading or floating.

Towards the end of the drift, I decided to put on a Headbanger Sculpin I had tied after watching a Rich Strolis video. It felt right to change tactics. I’ve had good luck this year fishing weighed streamers with floating line. You can give the fly some seductive up-and-down action if you do this: let the streamer sink after casting, slowly raise the rod tip, then lower the rid tip to let the streamer fall while you pull in slack to maintain contact with the fly, and repeat.

A few casts in, I felt a bump, raised the tip, and tightened right away. A good-sized rainbow flashed, shook its head and was soon free. Lesson learned! Always strip-set when fishing streamers, particularly with a soft Euro rod.

But, it was no matter. Fish come and go, but it was a delight to have the fly rod in hand and fish with some great guys. Seven hours ticked by incredibly quickly, and it was a fun float.

Soon, we were at the take-out, moved gear, and dragged the raft to the trailer. I had a really great time and would definitely fish again with Greg.

The Waterwolf is available for guided trips at a number of Massachusetts and Vermont rivers. He is a fun and thoughtful guide. You can reach him here via Instagram.

Greg, thank you for the float and for such a fun day! Alex, always great to fish with you, and thank you for arranging everything! 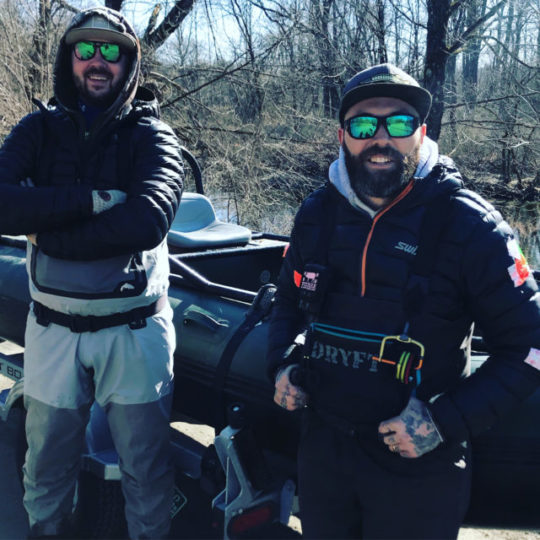 2 thoughts on “The Waterwolf”