It was Cheeky Tournament weekend, and I was excited.  Not for the tournament, but for the epic full moon tides the nights during that weekend.

Unfortunately, for, me my game is almost exclusively a night bite for bigger bass and Cheeky has an absurdly late start time of 6 am, and so, I appear doomed to mediocre showings at that tournament. 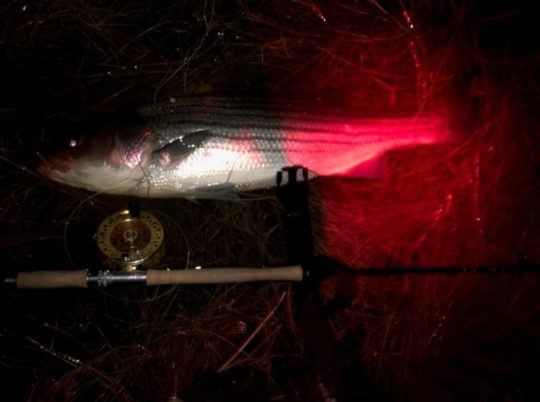 I had a lot of fun at the tournament social events and, overall, it’s a well-run event. But, if it falls during the full moon next year, I am seriously contemplating not participating.  Why? It historically has been one of my best tide windows of the season to find bass up to 42 inches in skinny fly fishing water.

Friday night, the herring stacked up during the end of the incoming tide in the thousands around 11 pm.  I started hearing the tell tale sound of a big fish working the big bait: tail slaps followed by a suction sound of a five-gallon bucket getting ripped under the surface of the water.

I spent the next hour trying to persuade that fish to bite my fly instead of the prolific amount of herring present.  Fishing herring runs, while a great way to find big bass in skinny water, is also maddening.  The fish can be hyper-selective and ignore your offerings cold.

Finally, I decided to stop throwing more natural imitations and switched my new prototype fly that produces a massive surface wake and has double rattles.  On the fifth cast, there was a hard hit and the fight was on!

At 38 inches, it was a great start to the night, but it was far from over.  I managed three more fish in the 27 to 29 inch class before the tide started dropping, and it was time to move.

One thing I have learned at these fisheries is that it is very important to move to next best ambush point.  Usually there will be three to four areas that present great fishing throughout the night’s incoming, high, and dropping tides. 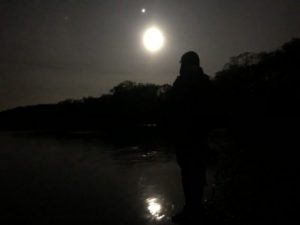 I set alarms for certain tide points and, when they go off, I will move even if fish are still biting.  I find that the larger fish seem to always come at the beginning of these feeding sprees. I try to be at the start of the bite at the best ambush zones along the tidal river.  My friend, Ryan, was spin fishing with nine-inch swim shads tight to the bottom and had five fish landed. He was beating me in numbers, but for some reason, his average size was much lower than mine for reasons I cannot explain. 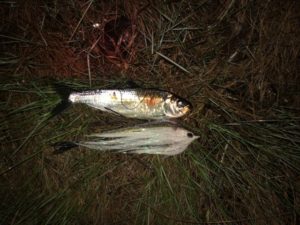 I made an aggressive move one mile down-river from the action and, initially, all was quite well for about 40 minutes. It was now 2 am.  The moon was now out in full glory, and visibility was great.  Then, I heard herring splashing, and they were pushing down-river to a sharp corner and last major constriction in the marsh before it opened up to a wide-open bay. 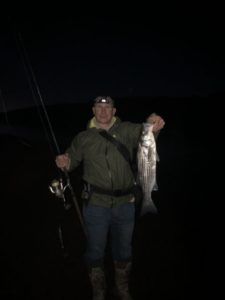 I switched back to a more natural fly, a synthetic slammer in the color of an alewife and which I had purchased from Ian Devlin back in 2018.  Second cast: a hard hit, and this fish initially felt as good as the first fish. But, this area has much greater current, so it turned out to be a hard fighting 31 incher that was using the current to its advantage.

That was my last fish of the night. I ended up with five fish.

Ryan pulled in four more sub-keeper bass on the same swimbait fished tight to the bottom, beating me on numbers nine to five. But, I had all of the keeper-sized bass for the night.

I don’t usually beat the surf-casters on big fish, but what I have found is that, on full moons, flies tend to do very well on bigger bass while plugs and other lures can struggle.  In fact, many surf-casters hate the full moon and avoid fishing it due to poor results.  On a fly rod, I have always found the full moon cycle and very bright nights to be highly productive.  Too bad I did not pull any fish of this caliber during the Cheeky Tournament. My total inches would have been 127″ for my best four fish. 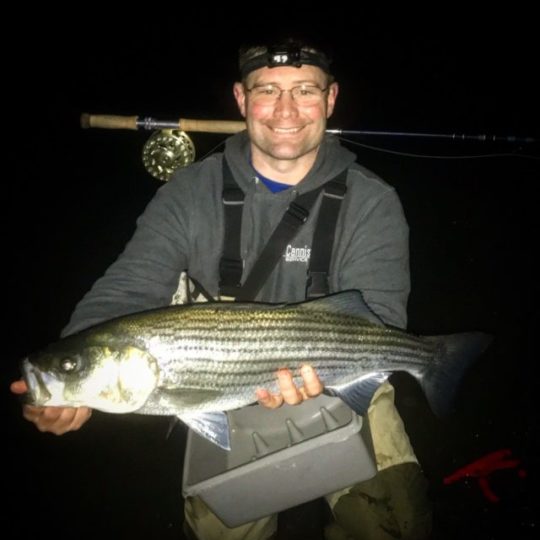 3 thoughts on “Big Bass Under a May Full Moon”