It has been another fantastic outing to Pittsburg, NH, my 15th trip thus far (our river guide here).

This morning, I decided to fish for only two hours in order to beat holiday traffic on the way home. I arrived at the river in the dark and again roll-cast out a bobber and the same egg flies at the same spot that produced yesterday. It was 27 °F. I was pretty chilled.

As with yesterday, the action started right away and then abruptly stopped about an hour after sunrise. I caught quite a few good-sized salmon and brook trout. Unfortunately, most of the pictures didn’t work out, as it was too dark.

I periodically had to chip off ice from the guides. The occasional scent of a wood stove reminded me of the winter holidays.

This brookie was the prettiest of the morning. 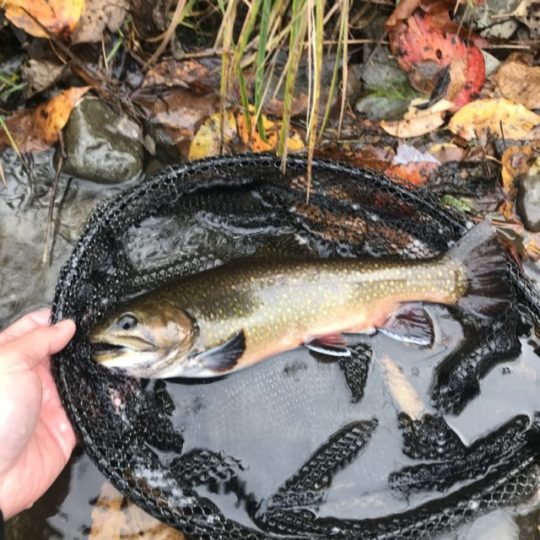 A joy to release!

Again, egg flies produced, but not just any egg. They were made with Eggstasy material, one which UpCountry’s Torrey Collins has long recommended. Whenever I switched to non-Eggstasy flies (for an experiment), whether eggs or not, the takes stopped.

The right technique also really mattered, as it did yesterday. For example, I spotted a good salmon in a run and proceeded to throw wet flies to that area and the soft glides below it. Blanked.

The fish were hunkered down and wanted eggs drifted right in front of them, low and slow. They seemed to be in an early version of winter mode.

One trick I employed, however, was this: I stayed on the bank and worked the shallow and bubbly waters nearby. They were loaded with fish, which were seeking cover under busy water while resting and leisurely eating.

So, it was a back-to-basics session, reminiscent of my early fly fishing days: the Trophy Stretch and bobber-style nymphing. My first fly fishing foray was in Pittsburg. It was there that I taught my wife and all of my children to fish. It was fun to go back to the bobber at the same waters and reminisce about so many great memories with my family.

I reeled up as more and more anglers showed up.

One person, with whom I’d crossed paths each day and was not having much luck, followed me to my car and asked me about strategies and flies. I told him everything I was doing. As you may recall, a goal of this blog is to spread positive energy and help out other anglers.

On the long drive back, I felt happy and fulfilled. Fellow blog writer, Ashu Rao, is a fun roommate and a dogged angler. He and I saw more fish than we deserved, and we had some great meals at Tall Timber. He, Jamie Carr (another blog team member), and I already are planning the next blog writers’ weekend.

So, if you’re thinking of being part of our team, post a comment below, and I will follow up. All we ask for is one post a month. There really are no perks to the role, except being invited to such outings and knowing that we give away 100% of any profits to Casting for Recovery and Project Healing Waters.

And, being part of a team that, thanks to you readers, is the #1 fly fishing blog in New England and #25 in the world.

I hope everyone has had a wonderful holiday weekend.

5 thoughts on “Back to Basics”