When Jamie Carr proposed a blog writers’ outing to target big and wild brook trout and landlocked salmon, I was immediately in. So was Ashu Rao.

I mean, what’s not to like? Salmonids and fishing buddies go hand-in-hand, and I’ve never fished in Maine. Plus, I had heard that 20″+ brookies were possible.

Since the rivers are among Jamie’s favorite stretches, I will defer to him on if and when he wants to name them. He did all of the coordination and planning, and I am so grateful.

Unfortunately, a bad bug waylaid him at the 11th hour, but Ashu and I forged ahead. Our hearts were set on going, and the higher ticket price wasn’t going to deter us, though we would miss Jamie’s company.

We stayed at a rustic house and brought up all of our own food. We were in a very rural part of Maine with very little infrastructure around us. We had beds and a kitchen, and that was all we needed. Our goal was to minimize time there and max out on fishing.

On Day 1, I got up early and was fortunate to run into fish right away and took a photo of my first-ever Maine fish, a smallish brookie. The Thomas & Thomas Contact #6 did a great job amidst the high flows. Later, other fish showed, including a 14″ hen. The smelt run was in force, and streamers worked well.

At 7 am, Ashu and I went out for a float with John Pollock, a guide. We anchored at one spot, and it was just lights out. We caught many, many big and beautiful brookies and the occasional salmon. They all came from that one honey hole.

The best catch for me was a beautifully colored brookie that John thought was 18″ to 19″. 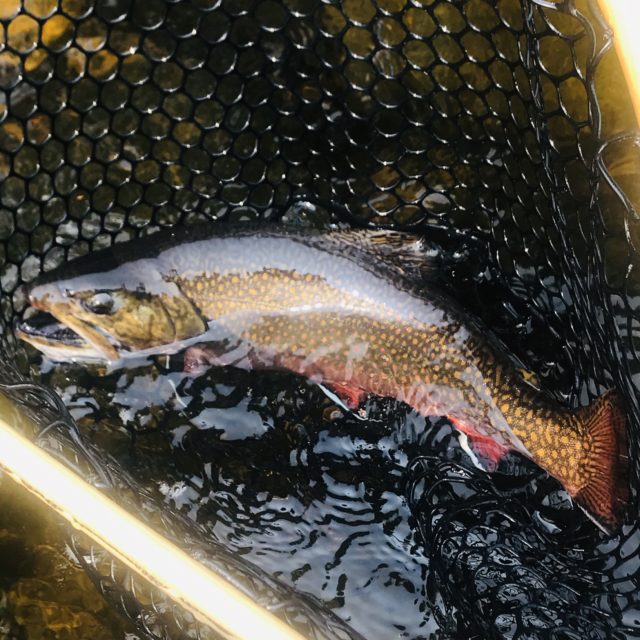 Ashu and I learned a lot about the fishery, and John was very knowledgeable and funny. He was a hoot. John mentioned that brook trout at some point stop lengthening. They keep growing by adding girth, and we saw some chunky ones.

In the afternoon, we got out of the boat, hiked a long way and waded. We didn’t run into as many fish, but we both landed specimens, and it was fun to see new water.

During the ride back after a very long day, it seemed fitting that Divine Providence shined upon us. I took this photo and didn’t realize until later that the sun was in the shape of a cross. 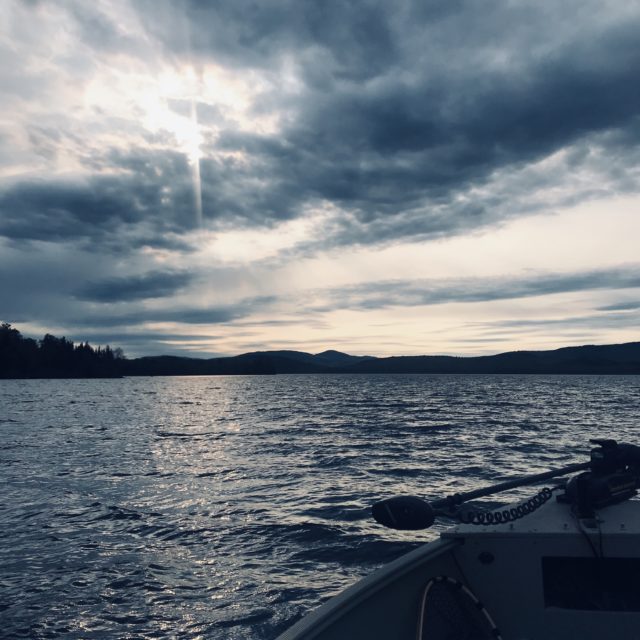 At the cabin, Ashu and I tied flies, and he later cooked a tasty dinner. We stayed up late chatting, knowing full well that the morning would arrive way too early. We were excited. How would we do without a guide on new water?

I left the Euro rods in the car and fished streamers with my H2 #4. I applied lessons learned from the Salmon River and pinged fish throughout the morning. The trick was to get deep fast enough and not worry about losing flies. A gentle swing also was important. Strikes were vicious.

The fish were at certain spots and not at others. I hit a lot of likely areas and was blanked. But, three stretches yielded quite a few fish. The best of the morning for me was this 15″ brookie. 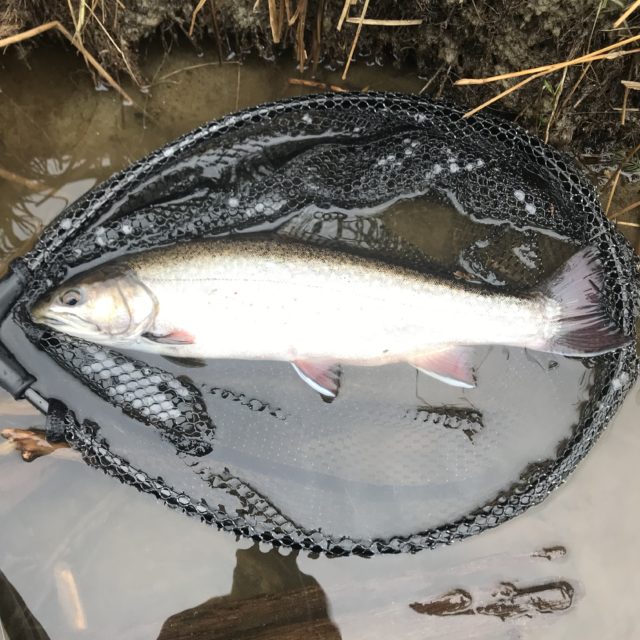 After lunch, Ashu and I jumped again into the car and drove quite a distance on a rocky, dirt road. When we arrived at our destination, there was a caravan of cars already parked all around.

Some friendly anglers were leaving and told us that the landlocked salmon had already arrived and left; they suggested that more productive water was likely to be found elsewhere. Other anglers appeared done, too, and were popping open cans of cold ones and swigging from a bottle of Scotch. Let the games begin!

Clearly, the runs had been fished hard, and we were too late for the dinner party and had to settle for leftovers. I wasn’t sure what to expect. Well, we’re here, I thought, and we might as well fish.

Ashu worked one side of the river, and I did the other. The runs reminded me of the Upper Connecticut at Pittsburg, NH, and I treated them accordingly. I eyed a 20-yard stretch that looked particularly interesting.

I soon pulled out fish after fish. There were brookies, salmon and the occasional monster chub. When the streamer bite at last ended, I put on a bobber and fished nymphs. More fish said hello. It was just a gargantuan amount of fish and, clearly, the waters were rich with biomass.

Ashu went to the car to get his sandwich and then chatted with the beer-and-Scotch crowd, who seemed impressed that we were able to do some damage. They happily offered us beer, and we shot the bull with them. They were great guys, happy and funny.

They suggested a spot a bit upstream. It wasn’t a secret, as cars were there, too. So, we said goodbye to them and then walked up to the new spot.

From afar, we saw many anglers and paused. Decision time. Casting for Recovery was holding a major event, and we saw three groups of guides and their guests. We hesitated approaching them.

I politely struck up a conversation with one of the guides and then asked if we could fish above them, if we promised to give them plenty of room. The guide was cool with that, and he later came over to thank us. He said that so many people had crowded them all day with nary a word.

I then spoke with one of the Casting for Recovery ladies. I told her that the blog gave away all of our profits last year, including to their charity (more here). She was a cancer survivor and was very glad to hear all that.

It was nice to see them and to chat with them. I’m glad that they could find solace, joy and community on the river, just as Ashu and I were doing. Cancer sucks. It already has taken so many of my friends and family.

With my energy ebbing, I started to cast. I decided to target the middle part of the river, as it just, well, looked fishy. After a few throws, I hooked a good-sized salmon. Ashu went to the other side and started catching, too.

Miraculously, at 4 pm, the guides said it was time to go, and we then had that stretch to ourselves. Ashu and I fished hard and again were in disbelief at the number of big fish we saw. At one point, I had a fish on every two to three casts. It was both fun and just completely shocking. Flies were getting shredded, and that was a good thing.

The best fish of the afternoon for me was this 15″ beautifully-colored buck. It fought like crazy, with tempestuousness.

Finally, after thoroughly working the runs, glides and chutes, we called it quits. We could have fished more, but it already had been 13 hours, and we had a long drive back. Our legs were tired, but our hearts were full.

After a big and satisfying dinner of grilled pork tenderloin, sides and wine, we called it a night. We both slept soundly, both exhausted and satisfied from the day’s events.

We fished the next morning but found lackluster results. The water temp. had gone down, and we ran into only smaller fish.

But, we were fine with that. It had been a great trip, and one for the ages. Maine’s fisheries were amazing, beautiful and fecund. Truly, truly, they are an angler’s paradise.

When my family and other blog writers afterwards pinged me about the trip, I initially was unable to describe the weekend, the scenery, the waters, the fish, the wildlife, the whole experience. Finally, I found a word.

Thank you, Jamie, for planning the trip and for all of your great advice. We missed you! Thank you, Ashu, for a great weekend!