That was the forecast I saw for parts of Friday and Saturday. The complication was that I was hoping to fish. You see, I had an 18-hour window while doing an out-of-state family errand.

My plan was to do a quick overnight at the Farmington and fish a few hours late Friday and a 1/2 day on Saturday. “Should I stay or should I go now“?

I went for it. 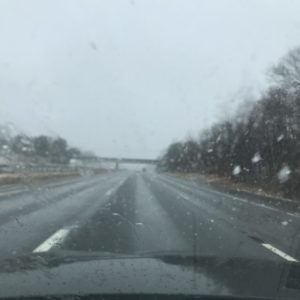 The drive down was treacherous at times. There was a lot of wind and precipitation and many slick roads. I drove through patches of fog, making for rainy haze. I took my time during the drive and stayed away from anyone going really fast.

When I got to the river, I had only a few hours of daylight and decided to hit two spots that I knew held fish. Nothing.

I threw streamers (dead-drifted, up-and-across, on the swing, and jigged) and nymphs (bright ones, dull ones, big ones, little ones). I tightlined and even threw an indicator, a rarity for me. Not a grab or a hint of one.

At dinner, I started to think that maybe fishing during a winter storm wasn’t a good idea. But, I was already there and thought of some new approaches.

In the morning, my car was covered with ice and snow. I almost wiped out twice walking to it, as black ice was everywhere. I decided to wait for things to warm up a bit and grabbed breakfast at a local diner. Just walking from and to the car was painful, as the wind and the cold stung any exposed areas of skin.

Still, I ventured to a spot that I hoped would shelter me from the wind. It worked, partially. I layered up, put on three hats, fired up the hand warmers and started to cast and periodically take off ice from the guides.

I rotated through flies, found a few new-ish rainbows at a deep and dark tail out and then moved on.

No one else was out. I saw only one car at a side pull out during my drives to various parts of the river. 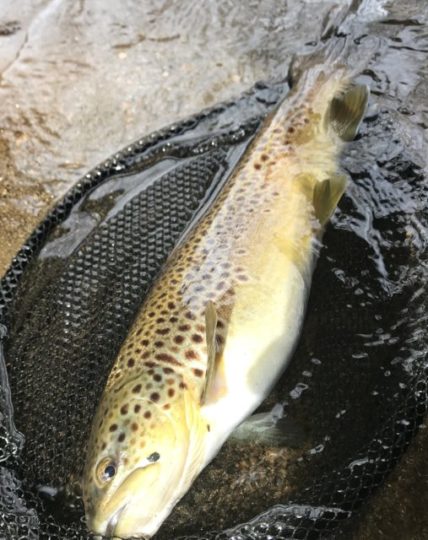 At the next area, I applied some lessons learned from my Salmon River trip (I’ll blog about them one day).

I landed a rainbow, which was odd, as I was very far away from the newly-stocked areas. Still, misery likes company. I was absolutely freezing at that point and seeing the fish made me forget the cold for a bit.

Soon, my indicator jumped a few feet, and I felt a good fish on. It felt heavy, but I think the 36 °F water made it sluggish, as they’re usually stronger fighters.

The brown taped at 18″ and had an orange elastomer behind its left eye, which made it a Survivor Strain fish stocked in 2014 or 2015 (schedule here). C&R really works.

It was beautiful. I’d trade one quality fish for a pile of new stockies any day, any time.

The brown’s gut was absolutely full and distended. I no longer stomach-pump fish, but I suspect it was full Winter Stoneflies and immature Hendricksons. One of the earlier rainbows, miles away, also had a very full stomach.

It was a good lesson for me: You may not see a lot of bug activity in the air or on shore, but there may be a lot of it in the drift.

With that, I felt that it was enough. By that point, three other anglers had shown up, and I offered up my spot to one of them. He was surprised and was very grateful. He proceeded to hook two fish, both of which popped off, unfortunately. Still, he seemed absolutely psyched to be fishing, and that was very fun for me to see.

On the drive home, I too went for the full-gut look by stopping at B.GOOD for a burger and fries. I felt like I had earned them.

I hope everyone is having a great weekend. Bugs galore are in the drift. It’s time to fish!