Recently, it has been the latter. I decided to work on the Buckskin Nymph after seeing Pat Dorsey post that it was one of his most effective winter flies. So, I bought some materials via Amazon, which ended up being way too thick.

So, I headed to my local auto supply store and found some natural chamois. After some trial-and-error, I was pretty happy with how a size 16 Caddis Larva turned out.

Unfortunately, the chamois is way too thick for size 20 flies, but I have some other material coming in the mail. I’ll keep you posted.

Then, I belatedly remembered that purple flies have done well for me during winters past. I read somewhere that purple does well during low-light conditions. We certainly have plenty of that in New England this time of year!

So, I tied up some purple Pheasant Tails. I like the Hairline feathers (link here) and added a touch of purple holographic tinsel for chuckles. I also made a purple version of The JT Special streamer that has done so well in the past. The purple Marabou color really pops out.

And, last but not least, I was really inspired by George Daniel’s high-water Bunker Buster. 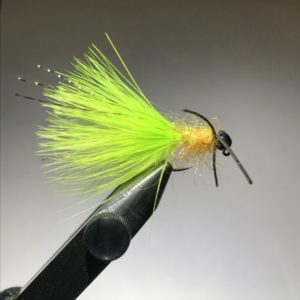 I didn’t have any of the polar chenille he mentioned, but I instead used ice dub in a dubbing loop and was happy with the result.

When I started fly tying a few years ago, I invested in an ice dub dispenser that had 12 colors (link here), and it’s been very convenient to have around.

Some days, the trout want plain flies. Sometimes, they want them bright. You need both in the fly box, IMO.

So, that’s what I’m up to. What are you tying these days?

6 thoughts on “At the Vise: Purple and Some Experiments”