I know BlogFlyFish does a gift guide, but I also wanted to throw down some opinions on great gear that I have started using this year so that we can keep the gift ideas rolling and the donations to this year’s non-profit beneficiaries (50/50 to Casting for Recovery and Project Healing Waters) increasing.

THE STREAMER RIG
I am more a generalist type, hoping to have (read: being able to afford) only a couple rigs that do most of what I want, but I finally succumbed to the opposing gear-head force in my life and decided to create a streamer rig.

I was going to save up and buy a really fancy fiberglass rod, but instead spent most of my money on the reel (more on that in a second). So, I ended up picking up the Eagle Claw Featherlight 5/6 rod for $25. Yes, you read that right.

And, I don’t regret it at all. I also love the old school cool of the yellow. Like an old diesel school bus careening down a gravel road. It kinda drives like the bus, a bit slow on the turns, but when you know it, you can really abuse it and push it farther than you ever thought. But, maybe, your bus driver wasn’t as crazy as mine.

Combined with a Hardy Ultralite FWDD reel in the 4/5/6 weight, it is amazing. I asked Mike at the Deerfield Fly Shop to special order it in, and they put backing on it for me gratis. Although the blog’s donations would benefit from you picking it up here, I highly suggest picking up the reel through a local shop like the Deerfield Fly Shop.

The drag is super-smooth, and I really like how much you can change it on the fly with the handy-dandy little color coded drag dial. It is one of Hardy’s lighter models, but the drag can really be cranked down for fights with strong tippet.

Also, combining the strong drag with the nearly unbreakable fiberglass Eagle Claw rod can provide some fantastic image opportunities as the fish, reel, and currents can make the rod bend nearly tip-to-butt.

I also decided to top off the rig with Orvis’s 6-wt. Bank Shot floating fly line. This combo turns over medium-sized streamers and giant bass poppers really well. It may seem counter-intuitive to put a fancy reel on the simple rod, but I have enjoyed it a lot. A lot, a lot.

With the slower rod action and the super front-loaded line, you can really work in a small amount of space to chuck the big flies. I mostly fish medium to small rivers, so the floating line works well for me with either a weighted streamer or a weighted polyleader. I am however saving up for a sinking tip version of the same line, though.

Like I said before, the quick change drag is very responsive and I have had some really fun fights on this so far. But I hope to put it through it’s paces on the Deerfield this winter. I’ll let you know how it does in the icy wastes of New England winters.

THE HABERDASHERY
I have had the pleasure of tying flies with a legit crew at the Vedavoo HQ on their Vise Nights. Every once in a while, we get privy to see some new kit they are about to drop. I really fell in love with their new knit hats. But, I really like hats. Soooooo….

Maybe I am biased, but I like the Life Aquatic feel of the red hat. Also, I swear by their pinch pouches and net holsters. As a man of 6’5”, the pinch pouch has reduced the number of random fly boxes, nippers, and floatant bottles that slide down to the bottom of my waders when I loosen the wading belt. Small details that make the big differences.

THE TWO TYERS
I have been trying to develop some skills at the vise, but I’m still learning things here and there. Probably my favorite pare of scissors for fly fishing are these: Wiss Clippers. Never heard of them? Well, that’s because they are generally used for sewing and mercantile industry. I don’t remember where it was I learned about them, but I am almost sure it was on a fly fishing blog somewhere, lost to the haze of memory.

But, I think they work for our small threads just as well, and I find the style to give more delicate control of the blades than normal tying scissors. And they are much less expensive than other shears. I didn’t need to buy another pair because mine that I have been using for two years are still super sharp, but I did anyways because I didn’t want to be without when I eventually misplace the first set. 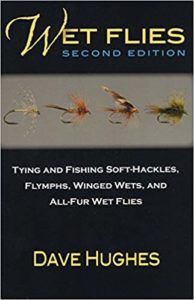 These were some of the things that stood out most to me from the past year. I hope you find something nice among our suggestions.

I would also love to hear what you guys found great this year. I would love some comments, as I am always needing more excuses to find new gear!

5 thoughts on “My 2018 New Kit in Review: Divergent Streamer Rigs and the Life Aquatic Hats”