In 1999, Frank Daignault’s book The Trophy Striper was released.  Chapter five is on fly fishing and to quote Frank, “a myth I should dispel is that fly fishing is light tackle, that it is schoolie fishing.”

Twenty years later, this myth is still alive and well, and I have found that most fly rodders I meet believe you can only catch big stripers from a boat or casting plugs to tease big fishing into fly rod range from shore.  My first real attempt at striper fishing on the fly rod was in 2005 after graduating from West Point.

I spent one full week living in North Truro and fishing Race Point, Head of the Meadow, and Coast Guard Beach.  In preparation for that trip I read Ed Mitchell’s Fly Rodding the Coast, and I set up my eight-weight with a shooting head system with floating and different sinking rate heads.

We fished sunrise to sunset and had some days where we caught 100+ striped bass each, but the trip failed to yield a single fish over 24 inches.

Later, after the trip, I realized some of the chapters I had skipped, such as the one on night fishing, may have held the answers to why I failed to catch any quality fish on the trip.

I would not get the chance to come back to the Northeast for stripers until eight years later, when my wife and I moved to her home of the Greater Boston area.

I spent 2013 chasing bass, primarily in daylight all over Cape Cod and, despite a lot more angling days than 2005, failed to produce one keeper bass on a fly rod.  I realized at this point I needed most likely to get into night fishing which I was not a total stranger to.

Growing up fishing small ponds for largemouths, I figured out that July and August required fishing between 11 pm and 3 am to produce the biggest biggest bass on those months.  My dad actually did not believe my stories.

So, one night I took him out and when he saw four fish between four to six pounds come to hand on large black buzzbaits, he was thoroughly convinced the stories were real.  Also, after 12 years in the military, I was used to operating at night with and without night vision devices. So, heading off into the woods or beach at night was not that intimidating to me. 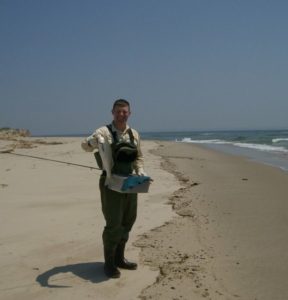 I decided to find someone to help me get into night striper fishing on a fly.  So, I hired a guide that specialized in that.  I fished three trips in 2014 with him, and the second trip was really eye opening to me.

We came upon huge fish gorging on sand eels in calf deep water around 2:30 am, and the activity lasted until 4 am around slack tide.

I struggled a lot with casting in the dark, and I had decided to use the guide’s rod.  Looking back on it, that was a mistake, and I highly recommend that you always use the rod you are most competent casting for your initial forays into fishing at night.  Trying to figure out casting issues at night is a nightmare.

I ended up setting my personal best twice that night with a 36″ fish followed by a 37″ inch fish.  But, the thing that surprised me the most was that, as the sun started to come up and tide was moving again, we started to catch plenty of bass again, but I could not catch quality fish and was once again stuck in schoolie land.

Five  years after that first night fishing success, I have been keeping a very detailed log and, with the exception of five fish caught while sight fishing during the day, I have not caught any other striped bass over 30″ in daylight on fly gear.

I primarily fish two-to-three hour-long trips at 10 pm to 6 am, and I have been refining tactics and methods with continuing higher success.  I am ending 2018 with 36 total keeper-sized bass on a fly, with 18 fish over 30″ and two over 40″.  I finally I feel like I am starting to crack the big fish code at night. 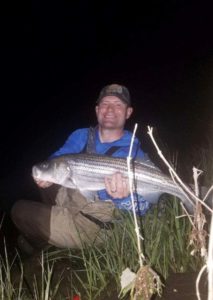 I have a very extensive striper book library and, among all 12 books I have, I could find only 41 pages total on night fishing. Most of it was the same information, just in a different book with generic guidance about going out at night.

Clearly there is a pretty major knowledge gap out there, and I think this is what is keeping the myth alive that “fly rods are for schoolies.”

I am focusing my writing efforts for this blog solely on night fishing for big striped bass.  You can expect one focused article per month tackling night-specific tackle, tactics, and the many different strategies for fly fishing for large stripers.

Hopefully, by the end of the off season, you will have more information at your disposal than I had when I started this endeavor five years ago.  Also, I recommend joining Stripers Online. Feel free to look me up on there as “The Graveyard Shift” or on Instagram as @canalflyguy.

I am happy to answer any direct questions, and my quest is to get many anglers to fly fishing at night and successfully catching keeper-sized or larger bass.  I have yet to run into one fly fisherman at night in any area I have fished in the past five years.  While I don’t want to get crowded, I would love to start seeing other fly anglers out there in the dark chasing big bass.

11 thoughts on “Fly Fishing Is Not Just for Schoolies”