Last night, my buddy Robert came up earlier than expected. This morning, we fished together. 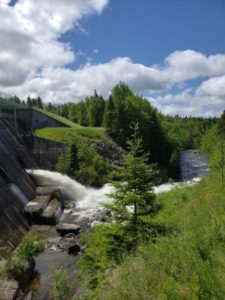 Due to the cold, raw, and windy conditions, Murphy’s Dam was a no-go, and we fished below 1st Connecticut Lake instead.

There were cars at the usual pullouts as early as 6:30 am. No worries. We hiked further downstream to some reliable spots.

Almost immediately, we got into fish. Robert started off with a nice brookie on a streamer, and I followed with a rainbow on a nymph.

After the pressure was off, we got into more fish. They were stacked like cordwood in some of the usual pools.

By the time we fished our second pool, more people showed up. One angler fished the pool below us, and another worked his way above.

Instead of competing for space, we fished some B water and found trout and salmon. The stockies spread out quite well.

We threw a combination of nymphs and dries to entice them. Some had battle scars from hard hooksets and improper handling. Further upstream, we ran into other anglers who also reported great success. We were off the water by 11:30. Overall, I went 11-for-21 and Robert caught at least a dozen.

We fished below Murphy’s briefly in the evening. A couple other friends from Trout Camp joined us. We used a combination of streamers, soft hackles, and dries.

Overall, the fishing was quite slow. I got only one small rainbow and Robert’s friend, Griff, got three bows with one big brown lost. We all missed many takes. The fish rose to a combination of an evening spinner fall and a caddis hatch, and it was tough to narrow down fly selection.