I fished the Souhegan briefly after work this past week. I started off at a favorite spot by swinging streamers, my go-to for finding aggressive fish. Nothing.

I changed flies and retrieves without so much as a bite. At this point, bugs were popping off like crazy, so I decided to switch to nymphing. 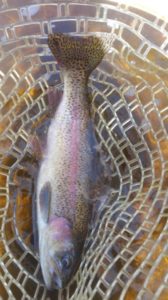 After a couple brief adjustments I got onto some fish, a mix of bows and browns. NH Fish and Game did a fantastic job stocking this year and I hooked a few fish over two pounds. Despite the sunny conditions, the water was still around 58 ˚F.

The fish fought hard. I caught fish on a mix of Pheasant Tails and Caddis Nymphs.

Later, I moved to another spot upstream. This section comprises mostly of pocket water. It is mostly dink-and-dunk water, well suited for Euro-nymphing.

I usually do well here at higher flows, but, with lower flows, I found every submerged stick in the river. I lost a lot of flies to both fish and debris. It was very frustrating to say the least. 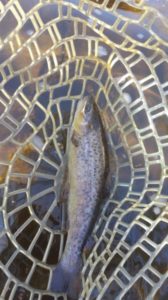 My luck changed towards the end of the day as I found some longer, bubbly runs well suited to indicator nymphing.

Over the next 20 minutes, I went one-for-three with a lone bow landed. Unfortunately, I had to leave just as the action picked up. Still, it was nice to get out and catch some fish.