I went to a local spot yesterday. Although the air temps hovered around 55 ˚F, snow melt was minimal, and the river ran high but clear. I fished many familiar runs and holes in a favorite section.

I tightline-nymphed, fished a dry-dropper, and even micro-nymphed with an indicator. Still, I failed to induce a take.

As the day wore on, the effect of runoff became apparent, and the river ran colder and higher than before. I decided then to scout new water further upstream. 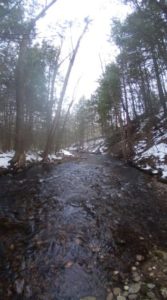 Further upstream, the story was much the same. The water was still cold and the fish lethargic. However, the river was more fish-able here.

After another hour or so, I finally induced a take. A beautiful two-inch wild brookie took my offering and put up a small tussle before coming to hand. It slipped away before I could snap a photo. Oh well.

After that, the action died down. I fished similar deep pools and runs without result. Despite the lack of action overall, that one fish was worth the trip. 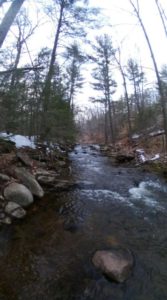 2 thoughts on “Sometimes All It Takes Is One”