There is a place I fish once or twice a year. It’s a small, humble, tannic stream that flows under a main road big enough to have a route number assigned to it in central MA.

It comes babbling out of a forest, only to make an enforced 90-degree turn courtesy of the engineer who designed the road culvert.  The turn itself creates a nice little pool at the upper end that will hold one or sometimes even two small brook trout.

You can park in the one-car pullout, scope the flow from the road, and pluck out a feisty native fish while wearing your sneakers and standing on the bank.  I’ve done it a few times myself and so has my son.  You could reel in and get back in the car to drive on towards bigger flows, or just drive past it completely with the flow of traffic without even noticing it.  I had done both myself a few times.

However, by exploring above the road out of more of a sense of curiosity than any expectations of success, I found that the water that appears as separate streams that converge before flowing under the bridge, both borderline fish-able in size, actually rejoin upstream.

They are simply split channels for a time, something common on big flat rivers but rarely seen in small high-gradient streams that nimbly find the quickest way downhill.

This has the unusual effect of making the stream get larger as you go upstream, like some sort of fluvial magic trick which helps to hides the best water from other anglers.

I was labeling some fishing pictures from this stream to share with friends, and I couldn’t bring myself to put the name of the stream on them.  “My favorite stream” I quickly labelled it, apparently feeling possessive enough about the spot so as not to risk anyone else discovering it without a proper introduction in-person.  But, the name stuck, and as time went on, it seemed quite apt for several reasons.

First, it’s the right distance from my house.  It’s about 20 minutes away.  Pretty close, but no so close that I can run over and fish it any time I want, given my family’s schedule.

I know that I could fish it often, but, I don’t.  And, I don’t think that it could handle much pressure.  In low-water summers, I don’t bring a rod near it, but, I will walk along it to check it out and wonder how the fish are faring. 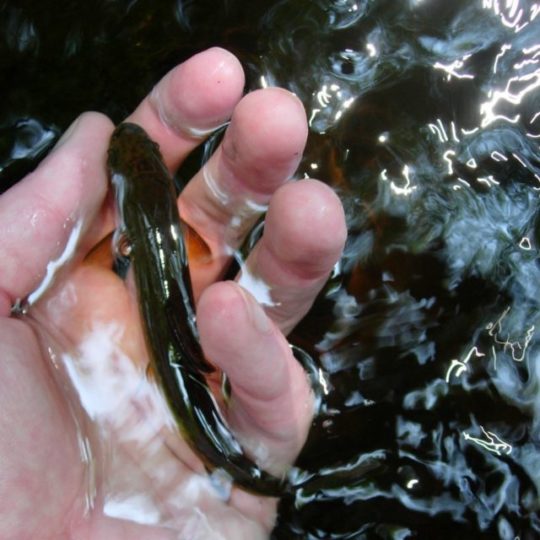 Next, this water has a certain wild feeling to it.  I was casting in a small run, standing on the bank, when I felt some slight tremors in the forest floor and heard what sounded like thundering footsteps heading in my direction.

On the opposite side of the stream, a pair of young whitetail bucks were focused on one-upping each other, playfully making their way through the forest like a pair of reckless teenage boys wrestling after class.

They stopped dead when they caught wind of me, wondering who had intruded their playground.  Another time, my wife and I saw huge tracks clearly imprinted in a muddy side bar made by a moose crossing the stream.  As we delighted in pointing out how big they were, we noticed there were bear tracks that crossed the moose as it traveled upstream.

I don’t know if they were there at the same time, but, both tracks were fresh.  I like to think they might have known each other by first name and offered the appropriate greeting.  “Morning Bob.”  “Morning Morty.”

Along one section of stream, the angle of the sun is such that it illuminates everything in a way that pleases the eye and draws you in to explore.  The lighting highlights the contrast between the bright and open stream against the dark forest of mature trees that bound it on both sides.  This areas also holds the coolness in summer, meaning that it can be wet-waded and fished comfortably even on the hottest summer day. 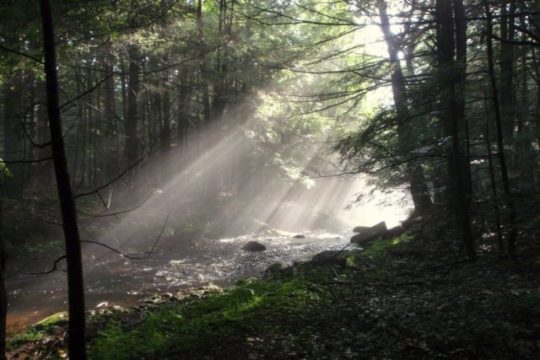 Of course, the thing that keeps me coming back are the fish!  The fish are mostly small, aggressive, feisty wild brookies, with thick dark backs and deep red spots matched to the tea colored water they inhabit.

Brook trout have an amazing mouth gape (think largemouth bass), and sometimes dry flies must be sized up if you want to avoid catching aggressive three-inch brookies that think they are the biggest thing in the stream. Dace and fallfish round out the native fish community.

Some years, MA DFW stocks brown trout or even brook trout near the bridge or at an upstream location.  This strikes me as an additional stressor that the wild fish don’t need, at least in this location and small-stream setting.

Action for wild trout is typically fast, with dry flies accounting for almost all of my fish, although, this stream occasionally fishes very slow for reasons I have not yet figured out. 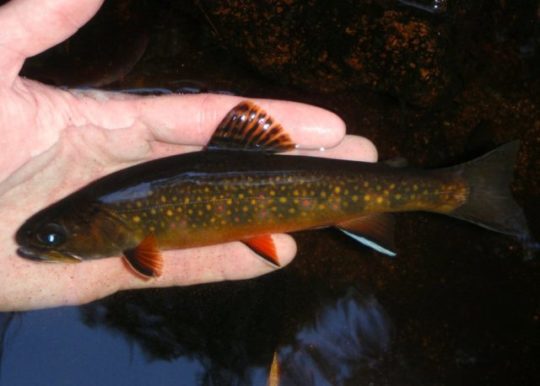 You might notice the nickname is not “the perfect stream.”  Sometimes, the mosquitos are thick enough to lift you up.  I recall being bothered by bugs, so I stopped and started killing mosquitos.

After quickly killing over 100 within a few minutes (I was counting), they were still as thick as when I started; needless to say I had to wrap up the fishing that day.

I have never seen anyone else fishing there while I was, and, angling pressure seems to be low.  However, one other angler who fishes the sections far off of the road like I do has the habit of putting empty IPA bottles on tree branches.

This has been his practice since before the recent popularity boom of so many canned IPAs.  I find it almost endearing, almost like trail marking, but also somewhat irksome as it leaves a human trace where there simply doesn’t need to be one. 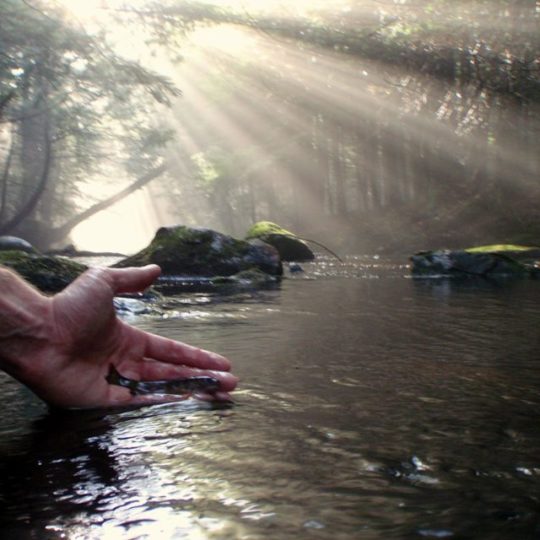 On one occasion, when I really needed to get out of the house and hit some water for the sake of my mental health, I hustled into the car with my gear to make the most of a short window of freedom.

I put on my waders, grabbed my vest, net, and…and…had no rod in the car.

Really?  How does that even happen?  If you are a parent or become one someday, you may be nodding a knowing nod.

But, after a few distraught moments I ended up making the most of things with a tiny little saw blade on my Leatherman, a Sassafras sapling, and a good length of 5x tippet tied to the end of my new “pole.”

I found that by fishing downstream in the quicker water relieved any need for casting, as the current would carry the fly below me.  Dancing and dabbing an Elk Hair Caddis on the surface drew some aggressive strikes that allowed me to land four fish and put a smile on my face as wide as the stream.

Last, now I can fish it with my kids.  They can use their graphite fly rods, but, only if they want to. 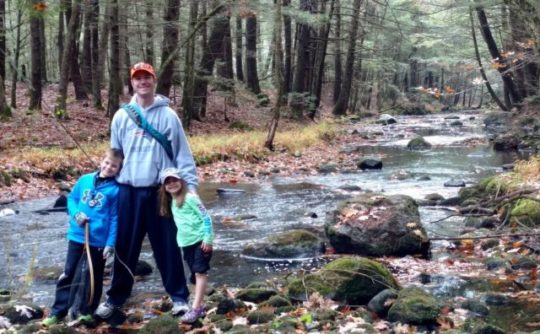 8 thoughts on “My Favorite Stream”