My name is Jamie Carr. I am a Mass. DCR Senior Aquatic Biologist, husband, dad, and someone who expresses his love of nature and wild fish through fly fishing adventures.

Thanks to the blog for letting me join the team. I’m getting some winter blues, and so, I thought I’d write up a day-trip adventure from last summer. 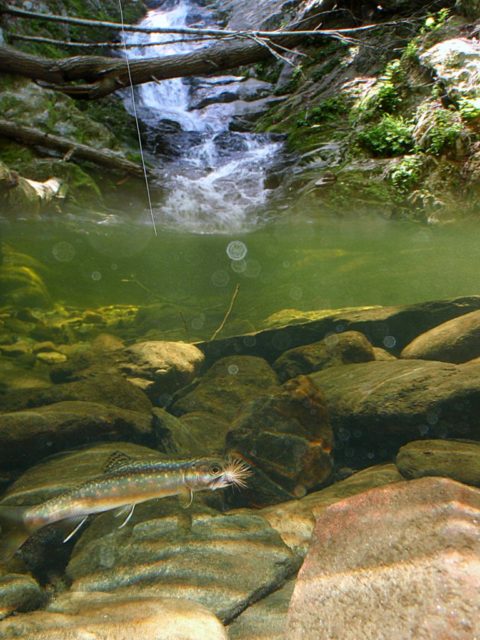 It’s always fun to daydream about exotic trips.  In fact, I would count it as one of my favorite pastimes!

However, one of the things I love about fly fishing is making new discoveries close to home.  The best trips involve walking a little farther to fish past familiar territory only to find a new favorite pool, or making a discovery to reveal an unexpected wrinkle of our home water.

For example, when I was young, I fished a small pond in New Hampshire every summer for years, while only rarely encountering a “big” largemouth bass.

In my college years, I started going out after dark, and discovered that “huge” bass could be caught with regularity under the cover of night.

After this temporal shift, it was as if I was fishing a completely different pond, one that I could count on to consistently produce great catches for myself and others (provided they were willing to stay up late).  Applying that lesson to fly fishing for trout in rivers has proved invaluable and led to a lot of my personal best catches being taken under the cover of darkness.

These days, my home turf is Massachusetts’ rivers and streams in the central and western part of the state.  I typically gravitate towards fish that are smaller and wilder, so I tend to seek out areas that are more remote, have unique features, or particularly pretty fish.

This summer, I filled in one of the “places in between” where I had not yet explored.  I had been waiting to get a day to explore when I parked my car in a pullout next to a clear and cold western MA river at a spot I had fished a few times.

This time, the water next to the pullout would be the last place I fished as I had cajoled my wife into driving me about 20 minutes uphill to drop me off.  My plan was to start at a headwater stream and fish my way downstream back to the car, exploring the increasing size of the stream (and the fish?) as it picked up water all along the way.

I started off quick with two pretty little brook trout living at the base of a waterfall taken on #12 tan Elk Hair Caddis, one of my preferred flies for small stream brookies.

As I moved downstream and picked up another stream that more than doubled the size of the flow, the water looked off color and appeared to be rising.   Thunderstorms were scattered around the state that day, and one must have dropped some rain on that watershed.  The dry fly action shut down.  I usually pack light on wet wade/hike trips, and though I had an assortment of dry flies in tow, I could only find one small streamer hastily stashed in my dry fly box: a white and silver Gotcha. 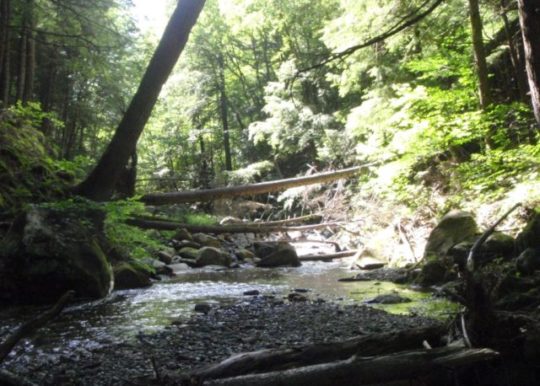 Thus it came to be that I took several six-inch wild MA brook trout on a salt water fly designed to fool bonefish on sand flats in the Bahamas!

I chuckled as each aggressive fish hammered the fly and was brought to the net.   I took my time working downstream and enjoyed red spotted purple and tiger swallowtail butterflies visiting streamside flowers.

As I found the confluence with the main river, I also found some stocked rainbow trout.  The rainbows felt like steelhead after seeing only small brook trout to that point, and there were typically multiple fish in the deeper pools.

I left the Gotcha on and trailed a small Copper John behind it, fishing in a manner I can’t recall having done before.  I picked up fish on both flies, but the rainbows seemed to prefer the bonefish offering.  They did their best impressions of that famous sportfish by racing around the small pools at top speed.

I was nervous about making it back to the car before dark, so I switched back to a dry fly to keep the catch rate down and keep myself moving more quickly.   The high water made progress a bit slow, as I was wet wading and the water that started off so refreshingly cool now felt downright cold.

In that last stretch I caught two brown trout, one a wild four-inch gem that I admired briefly before it escaped.  With about a half-mile or so to go, I was getting nervous about the fading light.  As much as I tried to pick up the pace it felt like the fish were trying to slow me down as they were hitting the dry fly with abandon.

My camera flash went off when I tried to document a nearly translucent brook trout.  Apparently, it was already darker than I thought.  I had to reel up and scramble over rocks more earnestly, and I admit it was a bit of a relief when I finally hit the unlock button on the car key and my lights flashed to show me where to exit the river.

My legs were beat from mostly rock hopping the previous three miles and dropping over 500 feet in elevation.  I shrugged out of my wet clothes under a carpet of stars, hoping that no headlights would come down the road to illuminate a goofy angler with a big grin standing in his skivvies trying to find a dry shirt.

I am thankful that there are still wild wooded places left in MA that hold wild trout.  I have not been specific about stream or river names here but if you seek out the “places in between” in your stomping grounds I don’t think you’ll be disappointed.

The fish may not see a fly until then, and they will be waiting…. 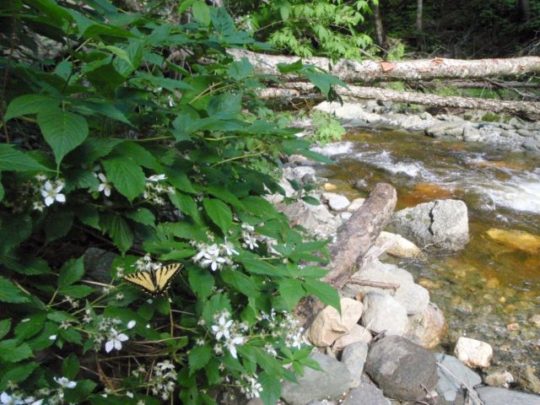 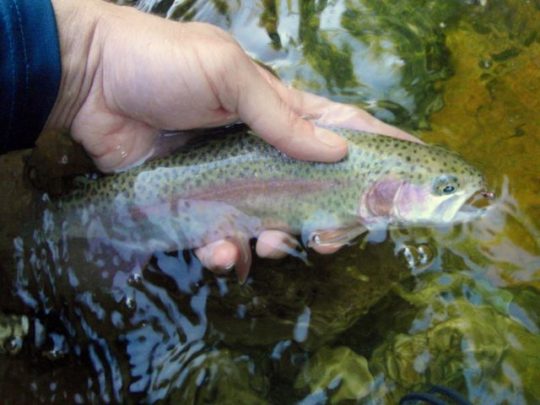 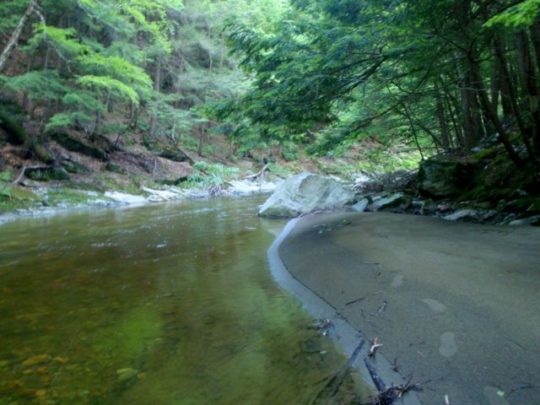 6 thoughts on “The ‘Places in Between’”