Not New England, but I figured maybe you guys would want to hear about this one. I’m also a little behind on this post. I got back from the trip a week-and-a-half ago!

I had the first two weeks of November set aside for a hunting and fishing trip to Montana and Idaho. The main purpose of this particular trip was mule deer hunting in Idaho, but, I did set aside a few days at the start of the trip to do some fishing with a couple friends from back home. We fished a couple days together on the Beaverhead River in southwestern MT, near Dillon, and, after my friends took off, I fished a couple days on Rock Creek, just outside Missoula. Both rivers were new to me.

The Beaverhead was awesome. It’s a smallish, fairly low gradient, meandering tailwater river. Similar in size to the Swift, but, not nearly as clear, and flowing through a floodplain of shrub and pasture rather than forest. The river is primarily a wild brown trout fishery, although, with a few rainbows mixed in. The Beaverhead is extremely prolific, with some of the highest concentrations of trout per mile in all of Montana and loads of large fish.

I had read a bit about the Beaverhead in the past, and it’s quite an interesting river. This is by no means a complete discussion of the Beaverhead’s fisheries but a quick synopsis from my memory. Interestingly, it suffers from too many fish in some cases. It should come as no surprise that ultra high fish densities can often lead to slow growth rates and smaller fish on average because of food limitation. The river also has a complicated relationship with irrigation agriculture in the basin. Drought and low flows in the fall can stress fish, especially larger fish, to the point of mortality during spawning. Too much water released from the reservoir often brings in loads of silt that can smother benthic insects and trout eggs. Irrigation needs generally trump recreational fishing in many places out West, thus, pitting anglers and guides against ranchers and farmers. So, long story short, the Beaverhead has some unique complexities that fisheries managers have to deal with.

While it may not be what it once was, I was seriously impressed with the quality of fishing on the Beaverhead. It had all the classic riffle-pool morphology, and trout seemed to be in all the right places. The fishing was actually pretty easy. Nymphing with beadhead nymphs and very generic patterns worked.  But, the key was the fluorescent orange bead, and pink scuds mostly. We kept hoping for a hatch of the ubiquitous tiny autumn/winter blue wing olives. The weather was perfect, just about freezing, gray, light snow, but, a hatch never did happen.

Big streamers also worked surprisingly well. There seemed to be a mixture of pre-spawn, actively spawning, and post-spawn browns. The pre-spawn fish, at least to the best of my knowledge they were pre-spawn, were particularly active on the streamer sometimes hitting it immediately when it splashed down. A few fish and photos of the Beaverhead below…. 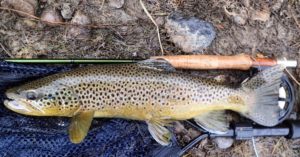 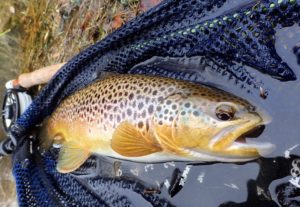 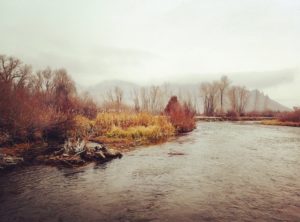 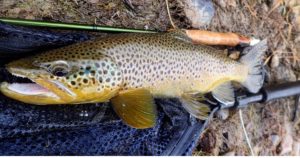 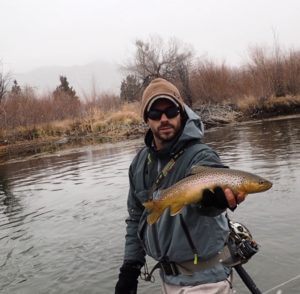 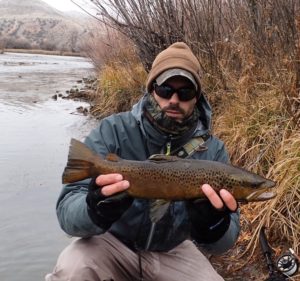 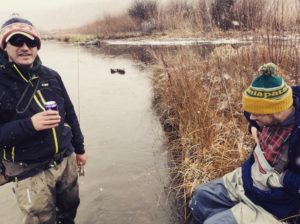 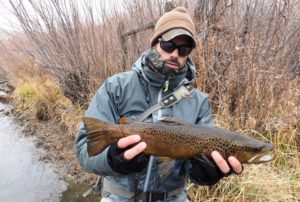 Next up was Rock Creek. I knew very little about Rock Creek before fishing it. I did know that it had a reputation for being easily accessible, easily wade-able, with eager trout, yet, still a beautiful and relatively uncrowded stream. All true. It apparently is also a very good dry fly stream during certain times of the year. Not so much in the winter, but, again, I was still hoping for a BWO hatch. Unlike the Beaverhead, Rock Creek is not a tailwater. The trout were in full winter mode – hanging out in deep, slow pools and not very active for the most part. On Rock Creek, I put on a lot split shot and dredged a big stonefly nymph with a small BWO emerger trailing. The emerger was definitely the ticket. About 95% of my fish were on the small fly. Photos of the creek and some of the better fish below…. 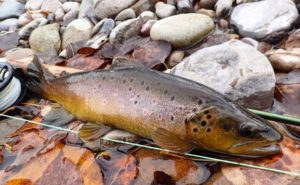 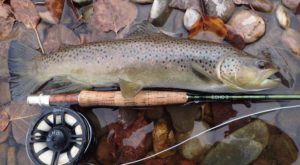 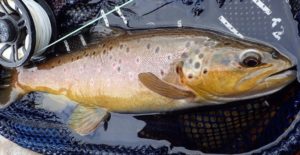 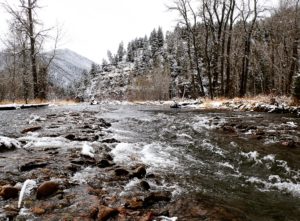 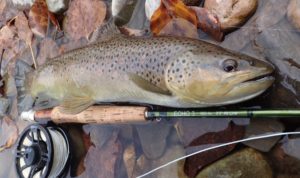 Anyone else fish these waters in MT?

From Jo: Here are some other photos, as Adam is too humble.