Thanks to you, some blog improvements on the technology front have been required.

The short answer is that traffic has really been high, and it has slowed down the blog. So, I’ve put in some back-end improvements that will increase page speed retrievals. And, a long list of tweaks. So, most of the blog improvements won’t be visible to you other than, hopefully, faster response time.

However, I also have added tags to some posts. If you look at the blog’s right-side margin, you’ll see this: 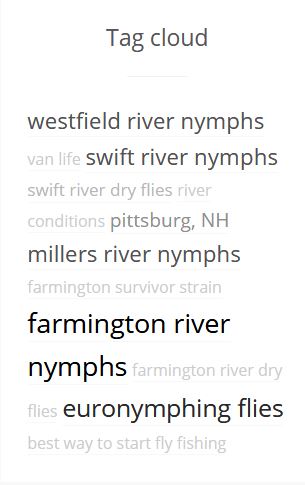 The more numerous the posts for that tag, the larger the font.

It’s a work-in-progress, given that we have over 600 posts that have been written in just a few years. The goal of the tags is to offer a more granulated screen by which you can search the blog. I’m starting to tag items such as fly shops and names.

So, I hope that this helpful!