I fished Nash Stream yesterday for some pure strain (heritage) brookies. The fishing was tough due to the high water and rain but it was doable. Nymphs worked early on, although I had to use a fair deal of weight to get down to the fish. My first spot started off really slow. I fished some likely looking water with nary a bump. I got into one small native and a decent fish (potentially a stocker) in a small set of runs but that was it for action so I packed up and headed upstream. The hot fly was a flashback pheasant tail. 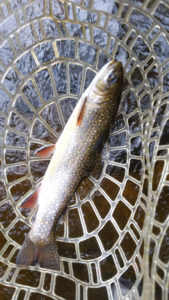 I fished a stretch of river downstream of a feeder stream but could only muster up one stocker in surprisingly skinny water near the confluence. There was more in stream wood and deeper undercuts so the lack of action was surprising to say the least. Instead of working further upstream, I decided to try the feeder for a little. I caught around 6 or so little natives, the biggest being 3 in. before I headed even further upstream.

The stream here turned into more of a meadow stretch characterized by riffles punctuated by deep pools and undercuts. I decided to stick with dry flies in this stretch although nymphs under an indicator or wooly buggers may have worked better. I caught some nicer fish here and lost a wild fish that went anywhere between 10-12 in. It seemed like the young of year fish tended to spend a couple years in the feeder streams before moving into the main stem since I only caught one such fish in this stretch.  Although there was an abundance of great water, there was a lack of fish. Some undercuts that looked very ‘fishy’ ended up being devoid of any life (or possibly some very wary fish). Some log jams did hold fish but for the most part, they seemed to come out of the riffled water or areas with more current. The hot flies were orange stimulators, elk hair caddis, and yellow bombers. 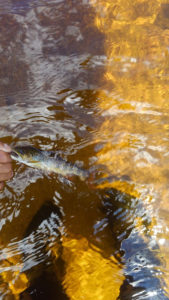 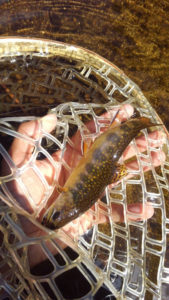 I hit a feeder stream on the way out and I caught a couple more small fish. All said and done, I feel that the stream has potential. There are numerous undercuts, deep pockets, pools, and in stream cover to provide cover to big fish but I feel that it is limited due to the stocking that takes place over the wild population. I’m beating a drum that has been beat a billion times, but a proper assessment of stream restoration can’t take place when there is a factor (stocked fish) that interferes with the success of the wild fish. I’m sure the situation is better in the upper headwater stretches. 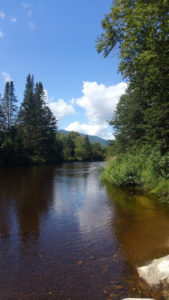 Since Jo hasn’t posted in a couple weeks and I only post once a week, I am looking for a guest post. If anyone has any fascinating or fun fishing trips they have taken lately or want to share some other cool thing, please let me know it the comments below. I look forward to hearing some cool ideas!