As a sort of prelude to this post, I would like to introduce myself. My name is Ashu Rao and I am going into my senior year at UNH as a marine biology major. Jo recently added me as a contributor and I want to express my gratitude since I’ve always been an avid reader of this blog. I hope you enjoy my first post.

When summer arrives and most trout streams become too warm, there are two options for anglers who still want to use the long stick: go to a tailwater or head for the hills. Tailwaters can be highly productive due to consistent flows and temperatures, leading to year round hatches and larger fish. As a result, they tend to get hit hard. The Swift, Farmington, and sections of the Upper Connecticut are great examples of tailwaters that never see a shortage of anglers. The fish in these rivers see dozens of flies in a day and in some of the more heavily fished pools, can be incredibly selective and finicky. While some people enjoy the challenge of fooling wise trout as well as the social aspect of fishing popular spots, it really isn’t my cup of tea. For other anglers yearning for solitude as well as more cooperative trout, headwaters are the place to be. The trout here are oft ignored since they are much smaller in size than the stocked variety, but what makes a day on a mountain stream memorable isn’t the size of the fish or really even the numbers (although they can sometimes be astounding), it is something much more intimate. Allow me to explain……

The Surroundings. Headwater streams are often times nestled deep in the woods in high elevation areas. These areas for the most part are unbesmirched by human development and therefore have the ability to appear truly wild. Having lived in Southern New Hampshire for most of my life, I’m always reminded of day to day life. Even at local trout streams, I am always within sight of a busy road and I inevitably share water with other anglers. Don’t get me wrong, I have no problem sharing water with other rule abiding and respectful fishermen. I am a huge supporter of conservation and protection of public land rights, however occasionally, I do yearn to find solitude and headwaters grant me this escape. In a way, these streams almost paint a picture in my mind of how I think things used to be: just an angler and a stream full of wild fish, nothing else matters in that moment. 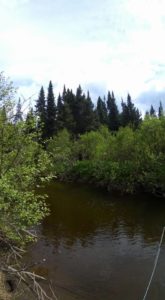 The Fish. This almost goes without saying. The endgame of fly fishing is to fool a fish (or more) into taking a carefully presented fly, right? Well, yes but that’s not the point here. Like I said earlier, many of the fish that you catch in these streams are small. Most of these streams are nutrient poor, so they host fewer resident hatches, lowering growth potential. To add to that, the average lifespan of native brookies in small mountain streams is only 5 years if not less in some cases. You aren’t going to the catch an 18 in. trophy out of a 20 ft. wide mountain stream, that’s a fact, but you will catch something that is so uniquely wild and beautiful in itself that size really won’t matter. Unlike hatchery reared brookies, natives show a wide range of color variation even within the same stream! Some have halos, some don’t. Some have pink belies, some have orange. There is just so much variation in a native stock, you really don’t know what you will get and that is part of the fun. 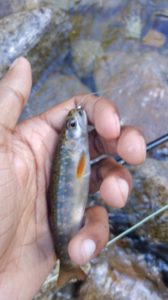 The Simplicity. Catching these fish really isn’t rocket science since they aren’t all to selective. Not many hatches go on in these streams so the fish are fairly opportunistic to begin with but, this leads to the misconception that these fish are stupid. In fact, they are far more wily and spooky than their hatchery reared counterparts so any mess up or misstep can send these fish into the next county. However, this can be avoided through simple fundamental fishing. Keeping a low profile, mending the line (in fact keeping as much fly line off the water as possible), and limiting your number of false casts and backcasts in general are some of the things you can do to increase your success on your next outing. Also, just like any fishing, adjust your techniques to water conditions. Although small stream natives tend to hit dries more often than their stocked or big water counterparts, it wouldn’t do you any good throwing dries into fast, broken, swirling water; that is better saved for nymphing. 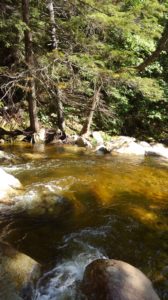 Here are some additional tips if you plan on exploring some headwaters on your own:

6 thoughts on “Where the Wild Ones Are…”