With limited time the last couple weeks I’ve been relegated to local fisheries – not that I’m complaining, I love warm water fishing. The trend of cool, wet weather has continued and the warm water fisheries in the area have responded accordingly. I spotted a number of beds at several lakes but no male bass occupying them. I’ve talked with a number of people and we all tend to agree that the short spurt of warmth a few weeks ago triggered the bass spawn but the downturn in temperatures quickly pushed bass back off their beds before spawning actually took place. There have been some smallmouth on beds in some ponds. Smallies start their spawning at slightly cooler temps than do largemouths so this makes sense. If we finally get some warm weather the bass should get back on track. Bluegills are also starting to move into the shallows but have not started cleaning out beds for the most part either. All that being said the fishing has been pretty decent in area ponds. 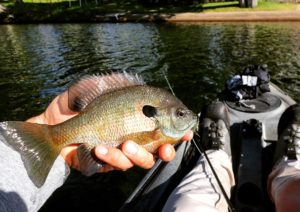 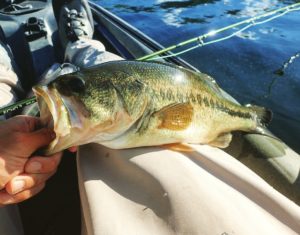 I also was able to get out for carp. First time in a long time that I fished for these guys. Carp are one of my favorite freshwater species to catch. Because of the way they feed and the habitat where they reside, techniques for carp on the fly are quite a bit different than for other fish in the area. Also, carp get big and the fight they put up is really impressive. I finally got to meet up with a regular blog reader, guest contributor, and commenter – Franky DeMayo. Franky is a hell of an angler, especially considering he just graduated high school! I didn’t even start fly fishing until I was 19 so he’s got a big leg up and certainly has a bright future in the sport. He really knows his carp too. He showed me a couple of his favorite spots in and around the Brookline area close to where we both live. Unsurprisingly Franky outfished me and landed several nice carp on egg patterns. I hooked one and lost it. Franky had to leave mid-morning. I took a break and came back after noon. I was able to knock the rust off a bit and landed a couple decent fish that were feeding on mud flats, again on slow sinking egg patterns. 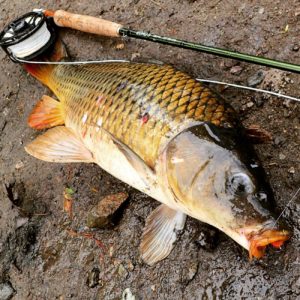 Carp on the fly are great sport and very easily accessible to just about anyone living in a metropolitan area or near one of our major rivers. They are a great species to develop new skills and practice fighting big fish. Carp are also available all summer long even when the water gets too warm for most other fish.