I had a bit of time after work today and made a quick trip down to a local reservoir a few blocks from my house. I was hoping to see if I could find some carp or a bass or two. The lake doesn’t look like much but hey it’s close.

It’s really been an odd spring, at least by my experience. It got really warm a few weeks ago and everything seemed to be on track, water was warming up, fish were getting active…but then things got cooler and it all slowed down. I figured that with the sun today the shallows might have warmed up enough to fire the fish up a bit. I spotted one huge carp but it wasn’t feeding, just cruising along slowly about in the middle of the water column. Carp displaying this behavior are always the most difficult for me to catch by far. I didn’t even try for it and kept moving.

I ended up spotting a few largemouth bass in the shallow flats in the east end of the lake. The lake sort of runs east-west and I presumed this section harbored the warmest water in the lake today, partly because of its depth but also because it had been exposed to the sun all afternoon. Even with the sun I don’t think the water was much warmer than the air and the bass were still a bit sluggish. I tried a few different flies but small wooly buggers got the most looks and follows. The bass mostly seemed curious and would follow my fly but not actually eat – even experimenting with a variety of retrieves. There were a couple that committed to inhaling an olive bugger slowly hopped along the bottom but even then the takes were half-hearted and I missed some strikes before hooking them. 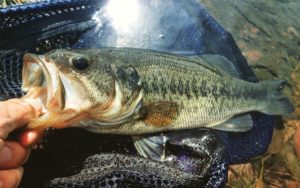 Slow day for action but it was nice to get out and see what was going on. If we get some warm weather look for things to pick up fast. Stripers, carp, trout, shad, bass, bluegills, everything is only going to get better through May. There’s just too much to pick from this time of year but that’s a good problem to have right?

Other notes: trout fishing has been pretty solid lately as well in western Mass. Dry fly season seems to be starting in earnest with Hendricksons and caddis hatching. However, I’m going to hold off on posting anything detailed about coldwater fishing for a while.

One thought on “Warmwater stuff”