Well, the hunting bug finally bit me like I knew it would. I’ve been dying to get out with my bow after some deer but that just isn’t in the cards for me this year – I can’t remember the last November I didn’t bowhunt… I’ve spent a good deal of my free time chasing waterfowl in the swamps and marshes with my kayak and a few decoys. Haven’t done too bad considering all of my spots are brand new to me.

I did tear myself away from the birds a few times in the couple weeks since my last post. Fished the Swift for a bit one afternoon but it wasn’t anything special, a couple decent rainbows on streamers. I had a friend report that he got a couple nicer ones and helped a nearby angler land a pig of a brown trout near the hatchery pool. I saw the picture and it was a great fish. I think the guy was fishing small orange eggs, which are often the ticket this time of year.

My most significant fishing time came this past Saturday afternoon. I hiked up and down the Stillwater off the Crowley Road access. I was determined to find some landlocked salmon. They had to be in there somewhere. Even though it’s been weeks since the last substantial rain I was sure some fish had moved all the way upstream to spawn. I hiked a sizeable portion of the stream and saw a number of redds indicating that fish had been in the reach. However, I saw very little evidence that the salmon were still around. The water was pretty low and clear and even spending substantial time peering into the deeper runs and pools yielded no salmon sightings. It wasn’t until I headed a ways downstream that I spotted a trio of salmon chasing each other around a large, slow, rather shallow pool. There was a redd in the typical spot right at the tailout but these fish didn’t seem like they were actively using this particular redd for spawning. They may not have spawned yet or possibly were finished and were sticking around until more favorable flows pushed them back to the lake. Either way I figured it was OK to fish to them considering they didn’t appear to be actively spawning. They were certainly not cooperative. I tried egg patterns, nymphs, San Juan worms, and a variety of streamers. A few times one of the larger males (looked like 2 males and 1 female) rushed my streamer but never really committed. I finally put on a white smelt imitation and drifted it lazily down the slow current. When it got right about to the nose of one of the males I gave it a twitch and he nailed it. Pretty good fight. Felt like a solid fish that was none the worse for wear having likely been in the stream for a couple weeks. 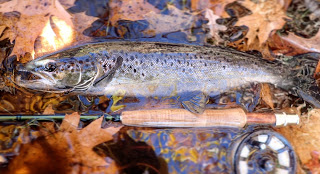 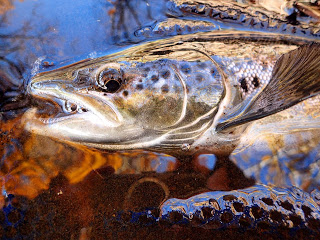 Real nice fish and a much more representative salmon than my first one a few weeks ago. After releasing him I continued my hike downstream and spotted a number of redds all in the usual spots. Only one had salmon on or near it but I didn’t cast to them as it looked like they were trying to complete their business. All-in-all a pretty slow afternoon catching-wise but a great day to be out and exploring a cool stream, spotting some nice fish. We definitely need more rain to get another push of fresh fish in there.

How has everyone else been doing? Any reports of big browns or salmon?

4 thoughts on “Hiking the Stillwater for Landlockeds”