With all of the rain in central Mass I thought it would be a good idea to check out the Stillwater River in the hopes that the run of Landlocked Atlantic Salmon would be getting started. From what I’ve heard and read it seems like the fall rains tend to get the salmon running upstream – I guess that’s not really news considering most lake-run or anadromous fish cue on flow to find and ascend spawning tributaries. I had also heard however that these landlocked salmon tend to just trickle in during the first couple good rain events and the main run doesn’t get started until later in November, or after several good rains. I’m not sure as I’ve never fished for these guys before. I’ll be learning as I go.

It rained like crazy on Friday but the river didn’t seem to be up all that much. Probably because it has been so dry some of that rain got sucked up by the ground. Either way, the river was up but still below bankfull and not that off-color.

I fished a short section of the lower river down to the mouth. My thinking was that if the initial instance of increased flows were drawing salmon in they wouldn’t have moved far upstream. I dug through my flybox hoping to find some approximation of a smelt – seemed like a good idea considering smelt are a major food source for landlockeds in Wachusett (and Quabbin for that matter). I couldn’t find what I wanted so I tied on a small gray and white saltwater streamer and hoped for the best. Within a few casts I had landed a couple small largemouth bass but no salmon. Moving downstream I fished the classic down-and-across streamer tactic, methodically covering water. Shortly I connected with my first ever landlocked salmon! Very cool fish to say the least. 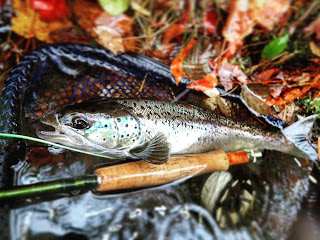 Snapped and few pictures and released it back into the river. I continued downstream to the mouth but never hooked another fish. The weather was terrible most of the day with driving rain. Even with the bad weather there were a few people out. One guy had also caught and released a salmon. Another guy hadn’t had any luck but mentioned that it was a bit early for the big push of fish. He also told me that when the run is really going you can see salmon porpoising all over the place in the deeper runs near the mouth. I’m excited to keep trying the Stillwater as the salmon move up in greater numbers as the fall run continues.

Did anyone else get out after salmon this weekend? What about other fishing excursions?
1,178 views