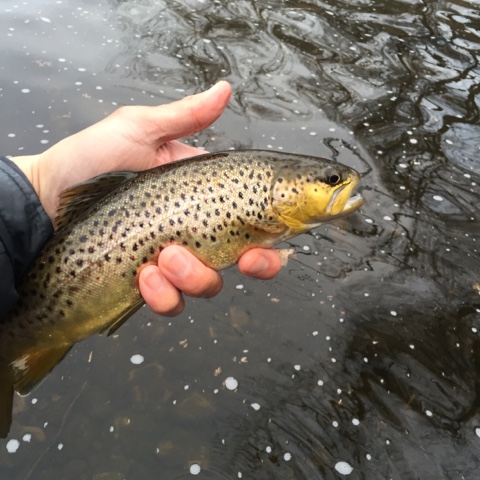 I yesterday was deciding between hitting a recently stocked river or gunning for wild browns. I picked the latter and went to the Farmington permanent TMA stretch. The stockies can wait.

The drive was easy and peaceful. Although it was a cold morning, there already were quite a few anglers on the river when I arrived. Many more came as the sun rose.

Spot A yielded 10 hook-ups, nearly all on the indicator. Three fish landed in five casts. Nine trout landed in very short order. Hey, I thought, this is easy. Then, everything stopped.

All the fish were browns and looked wild to me. Perfect fins, intact adipose fins, and no dye marks behind the eye. Nothing too big, but it was very satisfying to see fish like the 12″ one above. Brown trout just look fantastic, and wild ones fight like crazy.

I then headed to Spot B, which was new water for me. Not many anglers fish it. I hooked three and landed zero. A break-off and two hook sets that just didn’t take. I was using an indicator from a far-away distance and just could not set the hook firmly enough. Got a look at all three that got away: more browns.

So, it was a day to float the ol’ strike indicator. I think the cold weather may have suppressed the bug activity, which meant that the trout were not in the faster water, which is where Euro-nymphing shines. The fish were hanging back in the tail outs and slow water, and so, I had to cast from far away so as not to spook them. I’ll be back, though.

The Farmington is about 20 miles long. So much water, so little time.

A Happy Easter to all!