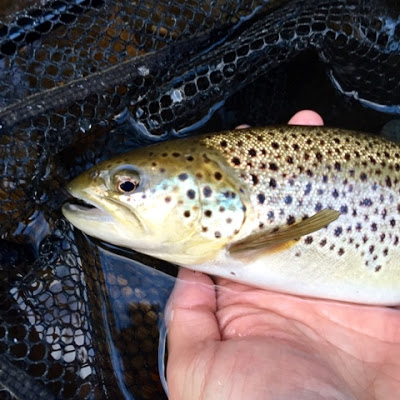 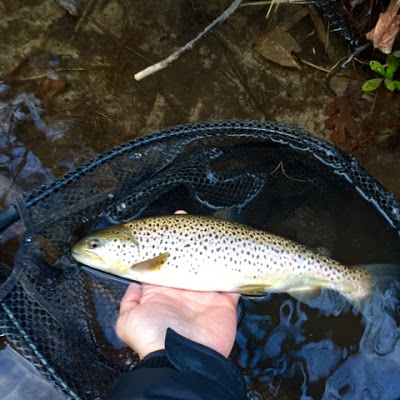 It was a satisfyingly slow day.

With my new “minimalist” approach, I brought to the Swift just one small box of flies.

I spent a lot of time visiting parts of the river I’ve not yet fished before. I took my time to look for a trout I could target. I looked and looked and finally saw some fish. They were scattered and few. The rainbows I did see seemed lethargic. Makes sense since these are the savvy survivors. And, the water was 39 °F. No bugs.

Then, I saw a fish that I thought I could approach without spooking it. I crept up and cast a big Prince Nymph, wondering if I could get the fish to take. I was determined not to switch to my go-to small flies and just keep at it. I wasn’t using an indicator. As Ed Engle writes in Fishing Small Flies, “The best indicator?  The trout.”

I cast over and over. Then, the fish slightly turned its head. I lifted the rod and felt weight.

The trout immediately bolted for a log, taking my line under it.  I thought I was doomed.  Fortunately, I was able to coax the trout back under the log, and the fight then resumed.

It was a 13″ brown (see above). I was pretty pumped. I landed two brookies later in the day.

I at the end ran into an angler who has fished the Swift a few times and has yet to catch. He was pretty down. So, I gave him a bunch of flies and gave some suggestions.

It was a slow day, but very satisfying.

8 thoughts on “A Satisfyingly Slow Day”