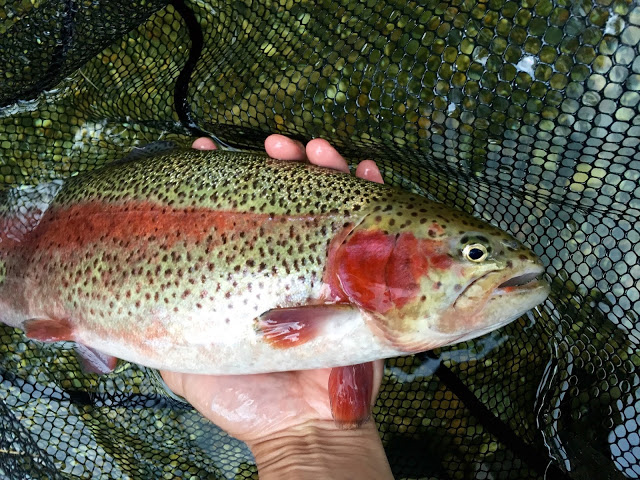 One of the more fun recent moments on the Swift involved landing this Fat Albert-esque 17″ rainbow. I was a few hundred yards above the Rt. 9 bridge.

A sudden thunderstorm was rapidly closing in. A wind started to howl, ominous dark clouds were bearing down, and the trees started to sway back and forth. The thunder became louder and louder.

I was walking back to the dirt parking lot, double time. Then, I saw a few fish and decided to make a few final casts. Back into the river.

One fish took. This one. I saw flash and felt an incredible tug. Gary from Easthampton happened to be walking by at the time. “Nice fish,” he said. “I think three pounds.” After some back and forth, and some coaching from Gary, into the net went the fish. The wind was blowing much harder.

Rain started to fall, and so, I took a few quick photos, released the fish, and scrambled out of the river.

The skies opened up 20 yards away from my car. I was walking back with Bill from Ludlow, and we marveled at how big the Swift trout can be. Other rivers have big fish, but the ‘bows in the Swift are unique in terms of size and sheer numbers.

We were drenched in just a few seconds. A good way to end the day.