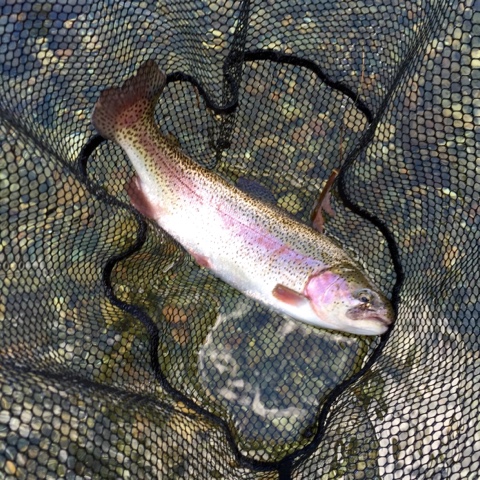 With no family vacation this summer due to schedules, I am taking some Fridays off from work. Today, I took a vacation day and fished the Swift.

I arrived at the Route 9 parking lot at 6.45 am–and, got the last spot in the dirt parking lot next to the trail

The river was packed all day. The trout were abundant and reluctant to take. They’re well on their way to getting educated. I managed to land five absolute brutes after hooking nine; two fell off and two snapped my tippet. The big Swift rainbows are really fun to land.

I used a wide array of both nymphs and dries. There wasn’t much elbow room on the river. For example, I wanted to fish a nice run below me, but, when an angler finished, another one quickly popped in before I could reel up and walk down. It was that busy. And so, I pounded the same two stretches and just kept changing flies and presentations

I met Scott, a Ware resident, who fishes the Swift early and often. He arrived at 4 a.m. to stake a spot at the Y Pool. Scott was very generous with his advice and it was fun to fish down-river from him and chat.

If you plan on heading over, I suggest you bring some #18 sulphurs, as Scott had tremendous production with that dry. If you nymph, bring an ample supply of small emergent patterns in sizes 22 or less. I tied some small hackles this past week, and I’m glad I did.

Also, bring some absolutely crazy flies, to show the Swift trout something new. At this point, they’ve seen most of the common patterns, I suspect.

Have fun, and don’t forget to arrive early!