Just got back from a trip to the Swift.  It was a rough trip- it was freezing, rainy, and tough fishing.  I fished below the Y-Pool for most of my time, and landed one 13 inch rainbow on a zebra midge. The new Simms Raincoat held out well, and I was dry despite the rain.  However, I learned the hard way that you need to bring warm gloves, and my hands were frozen solid.  It took me about 10 minutes every time I changed flies!  But anyways, I was sight fishing to this rainbow with a size 24 zebra midge, when after about 30 casts, he hit it.  I reeled him in, netted him, and began fumbling through my vest for my camera, so I could take a quick picture.  It took me a minute to find it, and I could barely unzip my vest pocket to get it out, because my hands were so cold! I finally got it, but my camera has waterproof housing, so the buttons are very hard to press (because you are pushing down on a spring which pushes down on the button, so it takes more force than an ordinary camera).  Now don’t get me wrong, it’s not very hard to push down, but my hands were so cold that I really struggled with it.  Finally, I smashed down on the button with my opposite hand, and it took a picture. I wasn’t sure if it turned out, but I wasn’t about to check and go through the whole thing again, so I released the trout.

Later, I found out that this was the only picture I got… 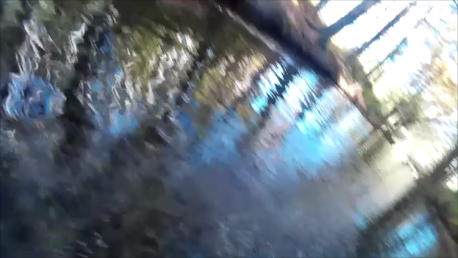 Clearly nothing is in it, so I guess I managed to dodge the trout. Sadly, this is not the first time I’ve completely missed a fish in one of my pictures, but I’m gonna give myself a pass on this one, given the conditions.
So after I released the trout, I was about done for the day, so I headed back to my truck.  One thing I will say, is that there are thousands of baby brookies in the Swift now.  While some people don’t bother fishing for these, I always have a good time doing it.  Although I didn’t fish for them this trip, they are a blast because they will readily hit tiny dries, causing big splashes! I’ve just always enjoyed fishing for them, despite their tiny size.
I’m not sure when I’ll be back, but next time I’m gonna go on a less rainy, cold, and windy day.  And I picked up a pair of these. I’ll see how they work, and let you guys know. See you on the water!
29 views

5 thoughts on “The Rainy Swift”