I’ve been reading a lot of Small Stream Reflections recently, and that combined with all the native brookies I saw at the Swift have inspired me to do a week of brook trout related posts. These beautiful trout, native to New England and Eastern MA, are a blast to chase with a fly rod, and deserve more attention than they get. I’m going to focus on everything brookie related, including some good spots to target them and tips for catching them. So lets get started! 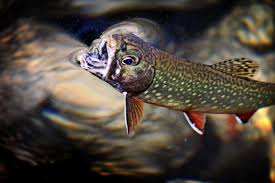 Here, I answered a simple question that I have asked myself many times: Why do I love native brook trout fishing? I apologize that my story is a bit long, but bear with me…

Being that brook trout are native to MA, there are a lot more of them than nearby than you would imagine. For a number of years, I didn’t really target brook trout. Now don’t get me wrong- I was still fascinated with them, but I didn’t think there were many good streams nearby, so I primarily fished for stocked rainbows and browns. I fished the big rivers near my house, but never really tried the small brooks. Then, by chance, I stumbled into the world of brook trout fishing, and never looked back.

5 or 6 years ago, I was browsing across the web, when I came across an article about the discovery of brook trout in a local brook. “Brook” may have been an overstatement- this was more of a long puddle. Maybe 2 feet wide, 10 inches deep, slightly muddy, and just kind of gross. Not a place I would have imagined holding trout. I’m not sure whatever happened to the article, but a similar article came out a few years ago about a different brook. Anyways, this article really struck me, because I drove over this puddle every day, and I had never given it a single thought. Not once did I ever consider fishing it, or even looking closely into its waters.

So I read the article multiple times, and went down to the brook to take a look. I hiked up and down that thing for an hour, before I finally one. There, in a tiny muddy pool, was a single 4 inch brook trout, circling around. I was stunned! I had no idea brook trout could exist here.

So after this experience, I got excited. I began researching brook trout, and devoured any information I could find. Old articles, small websites, obscure forums; if it mentioned the words “brook trout”, you bet I had read it a dozen times. Now there isn’t a ton of information on native brookies, so I learned that if you want to find out where they are, you have to explore.

Before I continue, it’s worth noting that MA does stock brookies. They are typically stocked in smallish streams but are almost all gone a month after stocking. Bait boys head up there, carton of worms in hands, and fill their creel with the maximum 8 brookies (provided they are under 8 inches). These fisheries can have some native trout too, but I like to stay away from the stocked parts, purely because it becomes a mess, with fishermen and trash everywhere, stringers of 6 inch brookies, and so on. I’m much happier exploring a quieter stretch of one of these rivers, and fishing for either native trout, or stocked ones that have traveled far away from where they were dumped.

Back to the story- I realized that exploring was the only way to find good brook trout streams, so I set out on a mission to find some. For months, I would get out 4 times a week, hunting for streams. I quickly learned that Google Maps was a valuable resource, and I would look on it for any state park or large clump of woods. Then I would enable a tracking device on my phone or GPS (My Tracks is a good app for this), and head off into the woods, breaking them down as I searched for a stream. Usually I wouldn’t even bring my rod, but occasionally I’d bring my Orvis Frequent Flyer Rod. Whenever I found a brook that held trout, I would mark it on a big map of Northeast Massachusetts.

It became an obsession. The best comparison I can make is to an athlete on a hot streak. You know when a baseball player is completely locked in? No matter who is pitching to him, he goes up knowing he is going to hit a home run. For Red Sox fans, think back to Big Papi in the 2013 world Series. Ortiz was absolutely dialed in. Well, that’s sort of like the situation I was in. I was getting out 3 times a week, and pulling new trout streams out of thin air. I was finding them in the local woods, behind the school, next to the nursing home, and everywhere else imaginable. I had no idea how many rivers held tiny brookies. For those of you who don’t imagine all these streams holding brookies, I’ll tell you there are at least 18 streams in Suffolk County that hold trout, that are not stocked.

In the past few years, I slowed down my hunt to locate as many streams as possible, and focused more on fishing them. I had accumulated quite a list of new, mostly unnamed brooks, and now I had plenty of new water to master. Which brings me back to my original question: Why do I love native brook trout fishing? And the answer is by no means simple, but I will try to explain why it is my favorite way to fish.

For me, native brook trout fishing represents mystery. You never really know if that little puddle you drive over every day will hold trout, or if the ditch behind the local school will.

For me, native brook trout fishing represents beauty, and calmness. These trout inhabit some of the most beautiful streams you will ever see. And the fish are beautiful too, of course.

For me, native brook trout fishing in small streams represents the pinnacle of fishing “on your own terms”. There is a very limited amount of knowledge out there, so it’s really up to you to figure everything out. When I started, I knew nowhere to go, but now, after years of exploring, I could write a book on the brooks in Northeast Massachusetts that hold native trout. Maybe someday I will.