I’m not sure how I contracted it. During my recent mini fishing trip, I ate alone except for one meal. I was seated at a bar for 30 minutes next to a woman who was turned away from me, speaking with a friend. I didn’t think anything of it because that’s how women at bars normally treat me, haha.

I’m PCR-tested regularly for my teaching job and was floored when I received the result. True, I had been feeling congested and some fatigue, but that’s normally how I feel when springtime pollen is in the air. So, I isolated for the required five days. Thank goodness for the vaccines, as my symptoms were very mild, and the biggest risk facing me was boredom.

At “5 + 1,” I was out on the river, staying masked when I was around people to pick up some morning coffee. And what a glorious outing it was. The flows were right, the water was warming, and fish were all around. That meant that the veterans and wild fish in the river faced a lot more competition for food, meaning they had to decide to pursue eats faster. Maybe it was luck, but my Frenchie 2.0 pattern in a size 16 just hoovered fish. When I switched to other usually productive flies, the hits stopped.

Three casts in, I was onto a pretty brown that taped at 19″. I’m always stunned when good fish are close to the bank. If you creep up to a slow seam slowly and cast from afar, you have a shot at them. 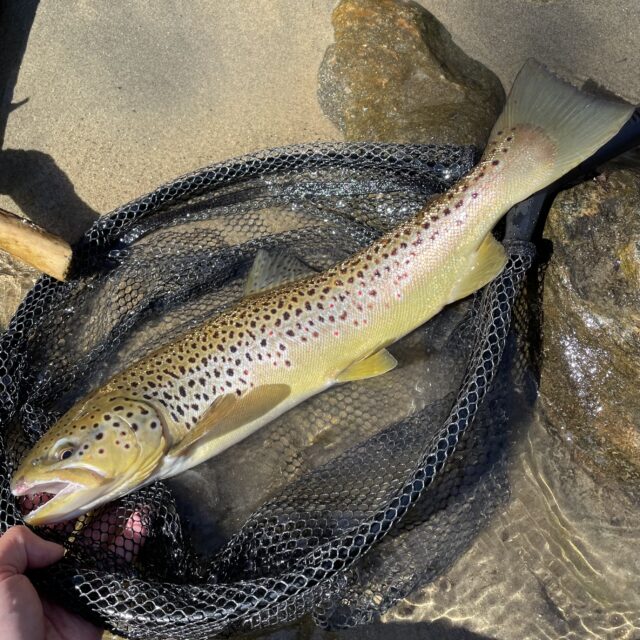 A few casts later, a hefty new arrival from the hatchery showed its stuff and measured at 20″ with a hefty 13″ girth. The Torey Collins formula for fat fish (length x girth x girth x 1.333 / 1000) suggested a weight of 4.5 lbs.

Then, the prettiest fish of the day appeared, all buttery brown and lean.

After a pile of trout, the bite window then shut. After high noon, I found a spot for some eager dry-fly action. The OGB (“Old Guard Brigade”) was out in force, those grey-haired veterans with their beautiful casts and dry-fly purism, seated on the bank about 30 to 40 yards apart from each other at the choicest spots.

I stood around and waited for a Hendrickson hatch and, yet again, was foiled. Some bugs did pop but not many, and there were no risers. After hours of killing time, I switched back to tightlining and then saw a few more fish. I’m down with the patience and quiet stillness that comes with trying to optimize for dries. Sometimes it pays off, and most of the time it does not. But that’s the Hendrickson hatch for you: it’s a fickle hatch, that one, but I’m hoping to run into a good one at some point during my trips around the sun.

I came home and was delighted to find a ribeye steak dinner. What a great Sunday! Life is good!

6 thoughts on “Waiting for Hendricksons”