I wish I had written this post in June, directly after fishing with my good friends in the Maine woods in May. But having waited so long also presents some benefits beyond sating the procrastination goods. It distills the memories to the most meaningful moments. Well okay, sometimes it’s also just random gobblied-y-gook which rears it’s head amongst the waves of my memory.

For example, I had seen one moose before in my life, at a distance in a canoe, in the Northwoods. This trip to Maine quadrupled my lifetime moose achievement. A Moose-multiplier if you will…. Oh you won’t? Dang it. 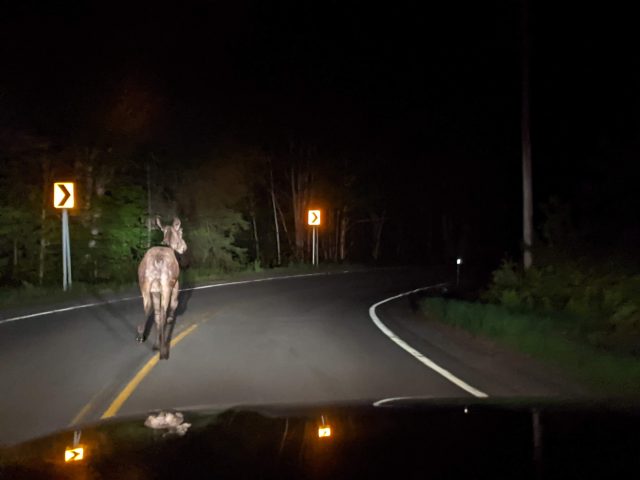 I was nearing the ending stages of my PhD dissertation and was unable to take much time off so I was getting in late and driving north late at night to join my friends. I was running on coffee and sugary snacks so was quite please that my reaction time was up to the task on slamming on the brakes when two massive shadows emerged from the edge of the road.

Maybe my reaction has been hardwired from growing up in the Midwest, where whitetails are a persistent threat to nighttime road safety.

I was absolutely enthralled by the moose I was laying eyes on. I had never seen one so close. These majestically awkward beasts were breathing puffs of frosty breath clouding like fog in my headlights. My adrenaline woke me back up, and their mud coated hinds were seared into my memory.

The next time a moose jumped out in front of me was about one more minute down the road. I was just thrilled to have seen so many! Well, at first. As this moose was taking it’s time commuting down the center of the road to its next location, I stayed behind this beast as it trod down the center line for a fair few minutes before it took its own detour and let me finish my drive in haste. 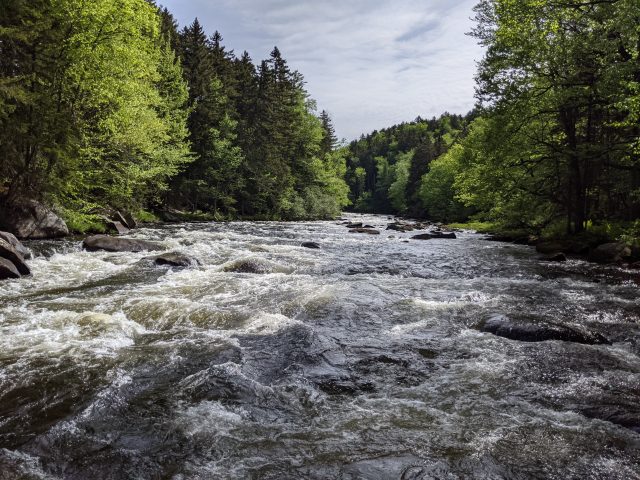 I awoke early and got out on the rivers the next day. I definitely started slow, particularly in comparison to the other folks from the blog for whom these waters were old hat. New waters, new techniques, new lessons learned. It had been the pandemic year before, and I had mostly been avoiding the crowds, plying the thin blue lines, targeting forgiving brookies in trickles. Those are excuses I tell myself anyway when I wasn’t landing a thing!

I was able to save the day near the tail end with a mediocre brookie on some junk near the bottom of a big pool. It was a long day, and that was a hard-earned fish.

That fish seemed to have broken the spell.  The next day saw much more success. The day was brilliant, and I learned a lot about fishing the river in the river. I have always been intimidated by larger rivers’ complexity, but about halfway through the morning, something clicked, and I was able to see it here. I managed to hook and loose several nice brookies before the day was over.

A reminder to you all: don’t forget to fish next to the bank before you ever walk in. A three-foot pool with over a dozen fish was just one foot off the grassy bank. Jamie and I were able to fish this spot, targeting brookies big and small for over an hour. 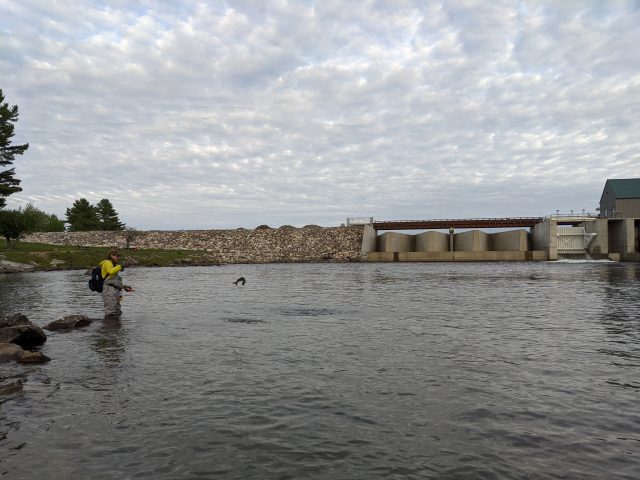 The fishing highlight of the trip had to be an evening outing. If you ever go to Maine, make sure to pack or tie plenty of smallish white streamers. I was using something pretty close to the Conehead Bunny Muddler in sizes #4 to #8. I choose to throw streamers as the sun was setting.  And pretty early on I thought I got one stuck on a rock. And then the rock moved. And went aerial.

While I have hooked some Atlantic salmon parr in the tribes of the Quabbin and on the Farmy, this was a new beast all together. It leapt into the air four different times, taking my line out of my reel several times. This fish made the trip for me, and I think it sunk its hooks into me much deeper than I did in return to it. I was happy to see it up close and to send it back into the water safely again.

As the sun set over the Maine woods, I kept landing brookies and fallfish. Mostly fallfish, but these were 16″+ and fought with a gusto that made them every ounce the contender as their salmonid brothers. I likely landed 15 fish over 15″ in a two-hour outing, all on some variation of small white streamer. Clearly these fish cemented this place dear to my fishing heart.

As the last bit of light faded, my blog brethren and I walked out of the area and back down the gravel road, reliving the moments we just had together, talking over the day, and our favorite parts. Our laughter peeled off towards the moon as it rose on the horizon. 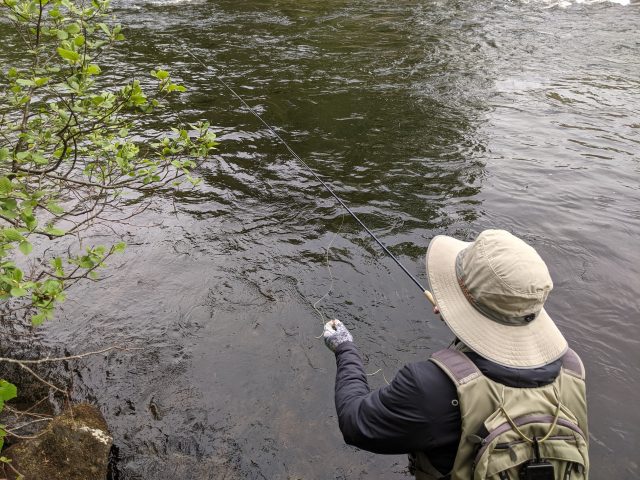 There was another day on the river, but I can delight you [read: bore you] with that on a whole separate post. Getting to the Maine rivers and woods is a trip I highly recommend people make the time to do. And hopefully you can do it with a group of folks you hold dear.

The moments that stick out in grandeur are the interstitial moments with my friends. Sitting on the bank and watching them play a riffle, talking of nothing in particular. Of laughter and good will and of serious moments enduring, entrusted with vulnerability. Having put some time between now and those moments I can say that I will not soon forget this trip. This fishing, the landscape, the food, but mostly, the friends. 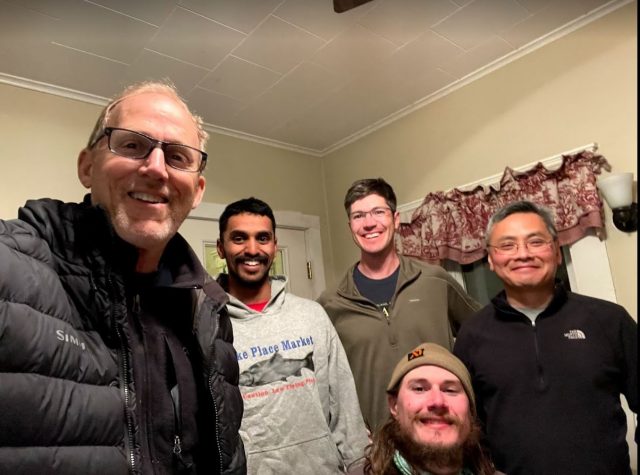 Can’t wait to get back up there!