What does it really mean to be “home”? Some say it’s the place where you were born. Some others say it’s that feeling you get when you’re with the ones you love.

To me, it’s always been a feeling. It’s like a warm blanket covering you on a cold night. It’s someone who whispers in your ear that “everything is gonna be okay,” and you actually believe them. Feeling like you’re home doesn’t happen often, but for anglers it can be arranged.

For the past year I’ve had this itch that I just couldn’t scratch. It was a call that grew louder and louder after I picked up the fly rod I had set down a decade earlier and started fishing again. It was a call to come home.

I grew up fishing the banks of the Housatonic River in Litchfield County, Connecticut. Some people think of the Hous and they think about PCBs and General Electric’s mess in Pittsfield. I think of long car rides and roll casts and wind knots that snap off a streamer that’s a bit too heavy for a 12 year-old to cast.

I think of fishing until the sun goes down, and then fishing some more. I think of Dobson flies that 100% do bite no matter what anyone else tells you. And I think of eating cashews from a Cumberland Farms gas station in Torrington on the way home every time.

This feeling got louder this past winter, and I just couldn’t block it out anymore. I had to commit to making the two-and-a-half-hour drive from Boston. Fortunately, I had converted a friend to the Way of the Five Weight during the fall and told him tall tales about the monsters that waited for him in the Housatonic.

I convinced him to take a day off from work and we took off early one Thursday morning in April. After the long drive, we pulled into the same spot where my dad broke his rod tip in the car door 15 years ago. I peed on a bush that I was certain grew strong only because I had peed on it so many times as a kid.

I was so excited my hands were shaking as I tied on. Well, it was either the excitement or the 40-degree temperature and pouring rain. Either way, we waded in and meticulously nymphed our way to the deep center current. Not even a nibble! No matter. We worked some other pools and switched flies dozens of times: nymphs, emergers, dry droppers, streamers. Nothing was working even though we had seen a few fish rise throughout the morning.

We stopped for lunch, and as I stumbled out of the river, I realized that I was smiling from ear to ear. Truthfully, I couldn’t have cared less whether or not we caught a single fish because this was my home river, and I still remembered every rock.

We fished all afternoon as the rain soaked through our clothes and seeped into our waders. Finally, we tried one last pool. I dug up a memory from a dusty corner of my brain: I had hooked and lost a heavy rainbow here when I was 15. I walked into the water and cast the same set up (nothing more than a single pheasant tail nymph under an indicator) I had used all those years ago to the same spot just behind the same submerged boulder.

The indicator twitched, I set the hook, and the fish took off towards the other bank. My buddy came running over with the net, and after a great fight and I released the fat, holdover brown back into the Hous. 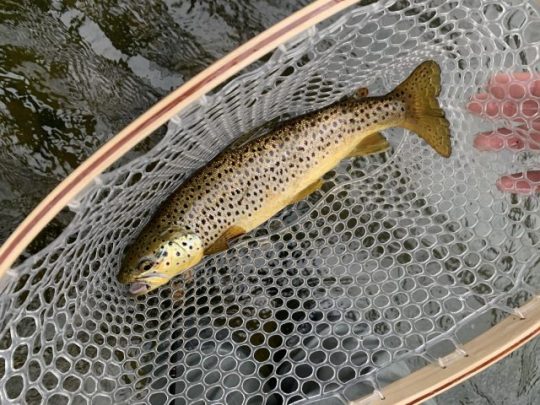 That beautiful brown was the only fish we caught that day. It didn’t matter at all.

For a minute I was 12 again. It was a sunny day in June and the biggest problem I had was figuring out how to keep my backcast out of the trees. The Housatonic was a special place for me. It flowed the same way it flowed all of the years ago, even if I did not.

One day, you might need to feel the warmth of that blanket. You might need to be told that everything is going to be okay. When you feel like you’re under water, take the time to visit that stretch of river where you caught your first trout or the secret spot where you learned how to cast. As anglers, we can always go back and dip our toes into our home waters.