I find the Hendrickson dry-fly hatch to be out of reach, usually. In my early days, it was self-inflicted, as I focused on tightlining and wets. Then, when I got into dries, a myriad of obstacles got in the way: wind, water that was too high, older anglers arriving early to claim the dry-fly spots, the vagaries of New England spring weather, missing the hatch as it had already progressed upriver, etc. In fact, until this weekend, I had never landed a fish on a Hendrickson dry.

So, I fished yesterday with both hope and realism, knowing there would crowds looking for Hendricksons. I’ve worked hard over time to make fly fishing stress-free. There is enough stress in other parts of my life, and I don’t want my favorite hobby to be loaded with bad vibes. That includes being kind to other anglers, even if I don’t really want to. Let me explain.

I got up at 2:45 am to be on the water by civil twilight. The plan was to try and see some fish early to then let the rest of the day be more adventurous. The river was kind to me, and I saw all sorts of fish: new ones, holdovers, browns, and rain-bros. The technique of choice was throwing the bobber from the bank so as not to stir up the fish before I could put a nymph in front of them. ICYI, a Euro rod and an all-mono rig does a decent job of chucking a bobber set-up. A long Euro rod really lets you keep line off the water, and casting isn’t a problem if you water-load the rod.

After I thoroughly nymphed the run, two really nice guys showed up and asked me if we could split water. I said yes with genuine friendliness and am glad I did. They proceeded to pull out very quickly over a dozen fish with their bait rigs, and they were kind enough to show me their set up and strategy. They were really happy anglers and were celebrating one of their birthdays. We had some laughs before I said goodbye. This duo fishes all year pretty regularly. And it made me realize that I now know one reason why certain runs later in the day can be pretty dead, even if conditions can be ideal: they’re loaded with sore-jawed fish.

I moved spots and decided to skip lunch to get to a dry-fly spot early. To kill some time, I threw some nymphs and landed a hog of a 19″ brown on a leech. 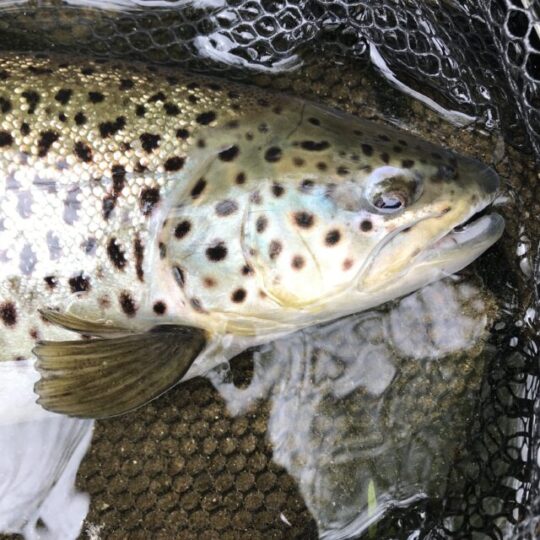 Then, I decided to rest the run and sat on the bank. Fishing dries involves a lot of waiting. You can fiddle with gear as you await a hatch, but it’s pretty boring. Thankfully, a friend showed up, one whom I’ll call Dries-or-Die Dan, or D-Cubed. He and I have crossed paths quite a bit over the years, and he’s an amazing dry-fly angler. We first met at the Swift River Toilet Bowl and then independently got tired of the trash, crowds, and stocked fish and started fishing elsewhere to find wild trout. Last year, we worked a Trico hatch together. D-Cubed is a good man and a great angler.

At 3 pm, we started to see a few bugs but it was scant, just like last weekend for me. I saw one fish rise and started to gun for it. I rotated through a bunch of experimental Hendrickson variants but couldn’t dupe the fish.

There were very few risers and no fish rose with a regular cadence. Randomly, I saw a very subtle sip below me, in front of a rock, and positioned myself for a quarter-down cast. My size 14 fly (brown beaver body, CDC) looked good to go. I floated it in front of the rock, nothing rose, and I felt deflated. Then, below the rock, a head appeared and confidently took the fly. Miraculously, I waited a second (the fly was below me), set the hook, and was tight to some weight.

It was quite a fight. The fish bolted for the other side of the river, and I wondered if my Cortland Super Supple 7x tippet would hold. I first thought the fish was foul-hooked, as it pulled so aggressively. With side pressure, I gently reeled the fish back to my side of the river and then eased it above me to get a better angle (i.e., the George Daniel Fish Fighting Technique). After some back and forth, it slid into the net, and I almost whooped. At long last, a fish on a Hendrickson dry! The brown was a lean beast, but it was a valiant fighter. I didn’t tape it because I quickly wanted to get back to fishing, but I’m guessing it was about 18″. 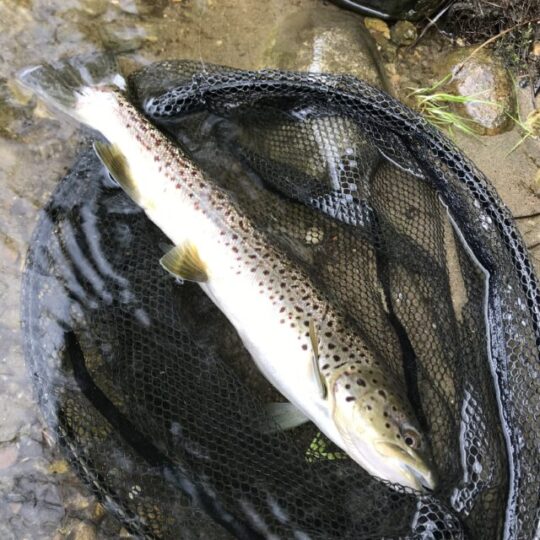 And, that was it. I didn’t see any more rising fish, and it was another scant Hendrickson hatch for me. After fishing for 12 hours while skipping lunch and forgetting to drink water all day, it was time to reel up. I was the last angler at that run, and so, I feel that I definitely gave it my best effort. Amazingly, I didn’t feel that tired. I think adrenaline can do that.

A Happy Mother’s Day to all….

Amazing last day of the trip. Thank you, @concord

Dozens of beautiful eats up top all day for cuttie