There’s something good and right about fly fishing with a friend when the noise of the world is a bit too persistent. There’s something even better and almost just when it happens during a pandemic.

And, so it was on Saturday when fellow blog writer, Jamie Carr, and I met up to fish.

Jamie and I don’t fish together often, given work and family schedules, but, when we do, it’s a commitment. Our trips have included Pittsburg, NH, a blog team foray at the Farmington, and an ambitious quest to chase Maine brookies, which he unfortunately missed due to a bad cold and during which Ashu Rao and I fished with him in spirit.

After some discussion Friday night, Jamie and I decided to hit the Westfield River’s Chesterfield Gorge area (our overview here). It’s a gorgeous and scenic area where cell coverage is not existent. From a fishing perspective, it is hit or miss. You either catch the flows and the stockings right, or you’re on for a still-beautiful day but with nary a fish in sight.

Jamie and I separately have hit the Gorge area quite often and know it well. Yet, we were amazed yet again with its vastness and rugged beauty. “It’s like fishing out West,” he said on Saturday morning. “Big river.”

And, was it ever. Cold, gusty, and high water at a chilly 40 °F, we were prepared for a long day and bundled up accordingly.

When we compared notes, as it turned out, we both have done well at the same fishy spots, and we proceeded to cover many of those stretches thoroughly. Jamie mostly nymphed. I mostly threw articulated streamers, an exercise in low odds. 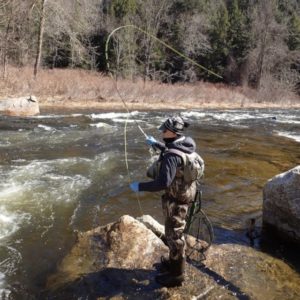 At one of the honey holes, I put on a white streamer to scout. Throwing a big-and-visible streamer is a great way to mark fish, as a six-inch piece of undulating fur and feathers tends to create a reaction. A flash here, a brief rise there, and the fish tip their hands. You later can go back to them with a nymph placed just so, ideally, in front of their noses.

I didn’t see a thing. At this point, the sunlight was just right, and I could see clearly into the runs, glides and quiet seams. I didn’t see any movement.

I tend to hit the Gorge in the spring, before the water warms up and throttles the fish, but it usually means that the river is high and cold. It also means that I’m usually there before the stocking trucks have rolled by.

These are low-probability outings, but they’re meaningful to me nonetheless, as I’ve taken my children to the Westfield. I enjoy the good memories of days that have gone by, although they do make me feel wistful at times.

With 1 pm rolling around, Jamie and I decided to break for lunch along the river bank and talk about everything and about nothing at all, the type of conversations that anglers from around the world know all to well.

We also decided to pack it in at the Westfield and hit the Swift River en route to home. Seeing a fish or two sounded good.

The dirt lots were packed as usual on a Swift River Saturday, and as we rigged up, we were in good spirits, as it was good to continue to fish.

Jamie also was glad to be fishing for the first time with a new bamboo rod, his third acquisition in a few months, a feat about which his wife knows. “She is a saint,” I said, and proceeded to game plan a conversation with my wife as to why my seven trout fly rods were not yet enough.

We found a stretch with some fish and not many, but was ideal, as there were no anglers near us. I kept chucking big streamers for grins and chuckles before resigning to pragmatism, at which point I switched rigs.

Later, with long shadows growing, covering, and chilling us, I heard a joyful yelp and saw Jamie tight to a fish. “That certainly feels good,” he said, all smiles, as his bamboo rod bent and pulsed. 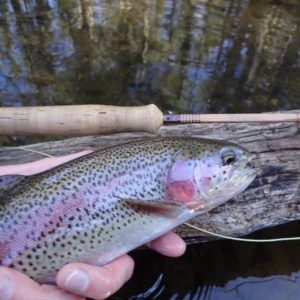 We found that the usual flies and techniques we deploy at the Swift worked again. Jamie landed two, and I landed one.

There was something comforting that, during these unsettled times, the same page of the old playbook at the well-trodden wading paths at the Swift River produced.

Jamie and I both cut our teeth at the Swift as new fly anglers. It’s a good spot for beginners (our multiple overviews of the river here).

And, there we were again, two old hands, who were still learning the wiles of trout in a life-long journey that trundles happily forward, year after year, during which you can get better but cannot ever truly master fully.

And, during these uncertain days, that certainty makes it all the better.

All of my best to you and yours, as we together ride out this virus….

8 thoughts on “All the Better”

Caught only one today. But, this was a welcome sig

Luck of the Irish was upon me today. Taped just a