I fished today. The good news: landed ten trout. The OK news: fished during some serious downpours, with thunder and lightning to boot.

The storm meant that the Swift was relatively quiet. More people arrived after lunch, after the storm passed, but there was still plenty of elbow room.

The rainbows have started to spread out, and they’re on high alert. They slide out of the way if they see something they don’t like. Indicator? See ya. Dry-dropper? Seen that one before. Wooly bugger? Been caught on that a dozen times, goodbye. Size 22 midge emerger? Well, I may look at it closely and then give you a refusal, since I want a size 28 or smaller.

Yes, the trout are getting more educated, en route to Ph.D.s.

Dan from Marshfield did well at the Y Pool, drifting small nymphs on patterns he invented. Some of the elderly regulars, with their 000 wt. rods and small dries, caught a few fish, all the while dropping F-bombs. Fun to hear their banter and how tight-lipped they are about their flies. State secrets.

I managed to coax nine rainbows and one brook trout by throwing a gazillion number of different flies. Here’s what worked well today:

There was a great deal of fog as I headed to the car. It gave everything a Halloween-like vibe as light faded. Dan from Marshfield ran into some newbies on the trail. He gave them some of his flies. What a guy

So, the day is done. I’m drying out my gear and blogging with a Coors Light at the ready. I tied a bunch of experimental flies for today: one did well, and the others were “meh.” So, am thinking up new patterns.

Hope everyone soon gets a chance to fish 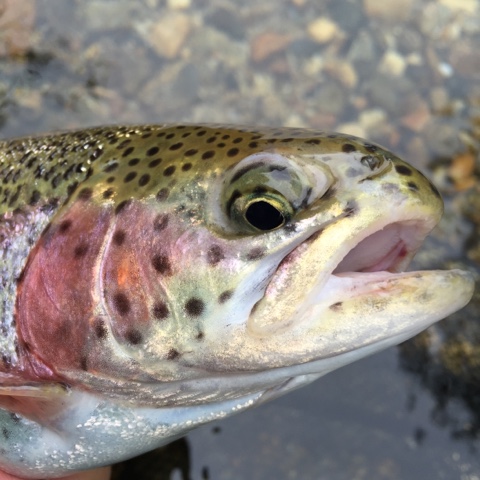 One thought on “Report: Soaked at the Swift River and F-Bombs at the Y Pool”