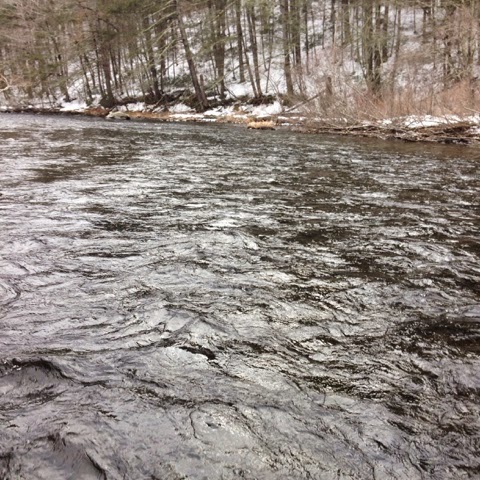 I’m still awaiting word on the MIA Swift River trout, and so, I fished the Farmington yesterday. Thankfully, home and family schedules worked out.

It was a tale of two sub-stories. It snowed quite a bit in the morning. Winter. Then, the sun peeked out and bugs started to move. Still, no bumps after seven hours of casting.

Only Tony landed one, using a super-secret fly. But, I got to chat with Andy from Cromwell, who is really knowledgeable and very kind.

Later I moved up river, and, suddenly, someone turned on the light switch: 15 hookups and nine rainbows and brookies landed in a span of 90 minutes.

I think the lean days are over on this river. All the fish I caught looked freshly stocked.

The best flies were: a flashy #14 Marabare (wish I had tied more than one, as the fish just slammed it), #14 soft hackle pheasant tails, and #18 chartreuse Copper Johns.

There was a significant hatch of stoneflies and winter Caddis, much more than last week. I mean, many bugs on nearly every rock. That’s a good sign: more bugs mean more active fish.

A few of the locals decided to fish dry flies in nearly-still water down-river. One guy did that for six hours and reported catching two 20″ browns. I hear the game is you stand for hours and keep eyes open for any rises. Then, you stalk very slowly and cast softly. As for my day, I was content to nymph. I’m just glad I caught fish.

Here is a pic of one of the trout. Young and new to the river, like the spring season.

Spinners. Inspired by @the_frenchflyfisherman and

Amazed to find this one sipping duns in skinny wat

A good morning for #driesordie, but lost a nice br